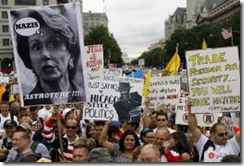 The streets of Washington D.C. are filled with citizens who want President Obama and the Democratic leadership to reconsider the massive government-sponsored reorganization of the nation’s healthcare system.

These protesters, many of them politically involved for the first time in their lives, have come from across the nation with a purpose: to let the federal government know that they do not want any further expansion of federal authority or spending, particularly in the sensitive area of personal health.

Some liberals in Congress and in the media are still trying to spin this massive protest against the left wing’s agenda as artificial, “astroturf-ed” into existence by Big Business and rich Republican fat cats.  Nothing could be further from the truth.

Personal friends of mine have paid their own way from Texas to Washington to be at today’s rally not because they were paid to do so by Big Business or the Republican party but because they believe deeply that the government in Washington must be rebuked.  In fact, ordinary Americans like my friends have been drawn to the tea party movement because it represents their fundamental values:

In rural Texas where I live, life is not much different today than it was 25 years ago when I first came to the state.  One can easily imagine that little has changed here in much longer than that.  Contrary to the change-at-all cost liberal viewpoint, this lack of change is a good thing.  People here are happy with the way things are.  We have little interest and less patience with the elites from Washington or New York whose agenda for us consists primarily of taking our tax dollars to spend in other areas and in ways that we do not approve of.

President Obama and the Democratic leadership have zero credibility with us.  Far from acting as a centrist president, Mr. Obama has proven repeatedly that his interests lie with the middle left.  The $1B spending program Democrats rammed through Congress without vetting or even reading in many cases, the government bailout, ne takeover, of General Motors and Chrysler at the expense of the company’s stockholders, and the proposed re-organization of the country’s healthcare system all speak to an increase in government scope, authority, taxation, and spending.  Mr. Obama’s agenda is a liberal one, make no mistake.  Many people who would have otherwise been content to mind their own business are angry about it, angry enough to take to the streets of their home town or to drive to Washington to demand that it stop, today.  Hence the tea party protests.

The point is that tea partiers are not radical freaks.  Neither are they stooges of the Republican or plants by business concerns or the ultra-wealthy.  To an extent that must send shivers of fear through the spines of liberals everywhere, today’s protesters are ordinary Americans who represent the real America.  Not the idealized, fantastical, liberalized version of America as seen through left-wing glasses but America as it exists today.  Now that these people feel their backs are being pressed against the wall, they are rising from their sofas, putting down their remote controls, marching on city hall, and demanding that Washington respect their Constitutional right to freedom from the tyranny of government.