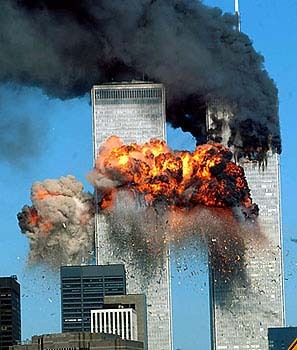 Nine years ago I was working in my home office when the first tower was struck at the World Trade Center.  Glued to the television as the skyscraper, a monument to western civilization’s ingenuity crumbled, I understood, truly for the first time, the existential, exponential relationship between creation and destruction.

More than anything, the Muslim terrorists who used jumbo jets, another hallmark of western society, to destroy our great and glorious structures exemplify the petty, self-indulgent pathology of spoiled children whose inability to create manifested itself through the only avenue they could master:  destruction.

There are those, of course, who sympathize with the misanthropes who killed over 3,000 Americans on 9/11/2001, as well as those who cheer the memory of their craven act of murder.  Still others long to follow in their footsteps as killers, wrongly believing in a religion they barely understand even as it incubates their xenophobia and hatred of the infidel.  That is, me, and, dear reader, very likely you as well.

The World Trade Center, the jumbo jets, and the date, 9-11, were all chosen as symbols that, once destroyed, would strike fear into the hearts of westerners in general and Americans in particular.  There is, the terrorists’ thinking went, no place that is safe from us.  This is true.

Western society is, unlike that of Muslim countries such as Saudi Arabia and Iran, and tellingly revealed in the recent film The Stoning of Soraya M., open, insecure, and therefore vulnerable.  This openness is based on our fundamental freedoms of association and religion and two basic assumptions:  that citizens are rational actors and essentially of the same democratic, Christian mindset.

As much as anything else, 9/11 demonstrated that not all of these assumptions hold in our increasingly multicultural society.

(It must be understood that western values are anathema to Muslim fundamentalists whose legalistic embrace of Sharia has evolved little if at all in the last 1300 years.  There should be no expectation that such people have any respect whatsoever for our systems of law and governance or our way of life.  Such would be entirely too optimistic even in the best of times, of which these are not.)

Instead of assuming that America will go on as she always has, let us consider 9/11 a symbol of the true nature of the world.  America has enemies who are small in number but determined and aggressive.  On the positive side, our military forces and defense apparatuses have our external security situation relatively well in hand.  Unfortunately, our energy dependency plays into the hands of Muslim terrorists.  Also, financial systems are in disarray because we have pursued ill-advised fiscal and social policies.  Similarly, our internal politics are highly polarized and personalized, facts that blind us to our essential homogeneity.  We are all Americans and we are all in the same boat, the biggest and best in the world, and our vessel is leaking like sieve.  It is time to bail together, before it is too late.

On this day, above all days, let us consider how to love our fellow Americans, to appreciate the many blessings God has bestowed upon this country, to reflect on ways we can improve our country’s financial and political health, and, most importantly, to act to preserve this nation so that our children and grandchildren live in a nation we will be proud to have left them.

This may mean compromising with liberals when you want to fight or vice versa.  The truth is that Americans have so much in common that it is foolish to let fringe political issues divide us.  Bearing in mind that the purpose of government is not to run our lives but to secure them, let’s move forward in unity on energy, education, and the economy, the three “E’s” that will make or break our country.

What It Means to be Free