I was going to let this issue pass, as I let so many irritants go these days, but the dogged persistence of Indiana Governor Mike Pence’s opponents is such that they simply must be countered.  And not countered just by me, but by every person in the free world with the brains and courage to think for themselves. 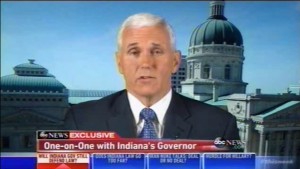 Liberal feel-gooders hate Indiana’s new law both because it wasn’t their idea – which is a prime concern of a certain type of self-important activist – and because it correctly paints the federal government’s drastic overreach in the Hobby Lobby case for what it was: a bare-knuckles attempt by big-government liberals to beat down a company that stood on principle and spoke the truth rather than knuckle under to the anti-freedom demagogues in power in Washington.

Indiana’s Religious Freedom Restoration Act is a direct repudiation of that bully tactic. Liberals and special interest groups hate the new law, but how many of the outraged leftists who are stamping their little feet have actually read the text of the bill as passed? A more innocuous set of paragraphs I have rarely come across.

Nevertheless, the current crop of liberals reject the law’s inherent fairness simply because it acknowledges the sovereignty of the 1st Amendment and protects religion from government interference over their revisionist agendas.  Other unforgivable problems with the law are that it acknowledges the possibility that there might be a God who created this world – including liberals and their anti-God mantras – and it rejects the heavy-handed government thuggery that was used to mug Hobby Lobby when the company dared to have a conscience that dictated different principles than today’s neo-liberals.

To be sure, freedom means nothing to these people, despite the fact that it is freedom that gives them the right to be wrong – and to be vocal about it.

To these neo-libs, freedom is the freedom to agree with them, period. Disagree and your right to unrestricted speech will ignored or worse. You will be shouted down, branded as scum in the press, or publicly humiliated or threatened. It’s worse still if you are a business owner: We’ve seen time and again those liberal activist thugs who show up inside places of business and proceed to terrorize owners, employees, and customers of those who dare to oppose their agenda, publicly or privately, or worse still, donate money to a politician whose platform doesn’t support their misanthropic ideas.

Given this backdrop, it’s quite an historic achievement for Indiana to pass this law at this time. Imagine the courage lawmakers had to possess to enact the legislation knowing full-well what would happen afterward. They persevered for one reason: because the voters of Indiana wanted them to.  Perhaps liberals could learn something by simply understanding how deeply the average American holds his/her right to simply be left alone.

This is what Indiana’s new law is all about: the ability for citizens and corporations to conduct their affairs as they see fit, without interference from D.C. know-it-alls and the radical activists who control the social agenda on Capitol Hill. We simply want to live our lives in peace, without special interests interfering in our affairs and if it takes legislation such as Indiana’s to restore order to American governance then so be it.

Unfortunately, that is the real problem with Indiana’s RFRA: It will not make government work again.  In fact, it will only make things worse.

Understand that by making things worse I don’t mean the infantile whining and temper tantrums that liberals are throwing in the here-and-now. This is merely the wailing of the defeated and crying over spilled milk rarely gets it back in the glass.  They are of no consequence.

The true problem is, that by legally constraining government in the name of protecting religious freedom, Indiana has opened itself up to a vast expansion of the definition of religion itself.  With RFRA as law, how can the state require that Muslim women unveil themselves for official ID photos or during encounters with law enforcement or transportation authorities?  How can the state discriminate against perverse cults who commit polygamy, abuse children, or commit animal sacrifice in the name of their fantastical religion?  How can a school board even enforce a simple dress code if misguided parents simply declare their child’s ripped jeans and torn shirt a symbol of their deeply-held faith in the power of slovenliness?

As Pandora found, some boxes are better left unopened. I’m afraid that RFRA is one of them. Not because there is any value in liberals’ arguments against it – because of big government’s intrusiveness, in principle there is ample need for the new law. It’s simply that in practice, RFRA is likely to create more problems than it solves.

What politicians and activists, particularly those of the liberal left but also those on the right, never seem to understand is that every law is inherently discriminatory. By definition, the sole purpose of law is to discriminate in favor of Behavior A at the expense of Behavior B.  Every new law creates a set of winners and a set of losers, which is why major new legislation is rarely implemented without discord.

In this case, liberals and the high-strung special interest groups who so vocally control them are terrified that their so-called “progressive” agenda may be stalled by Indiana’s new law. That or they’re pretending to be in order to gain face time in the press.  19 other states already have similar laws on the books and guess what? The liberal agenda is alive and well. So why the uproar now? It’s not about real anti-gay, anti-Muslin, anti-purple people discrimination.  It’s about a legislative defeat and a potential loss of momentum in the arena of social engineering, a venue in which liberals have been winning the war for America’s soul, one special interest case at a time.

Now Mike Pence has had the temerity to sign a bill already passed by the state legislature.  The bill’s passage demonstrates the will of the people of Indiana.  Pence’s small act of ratifying the bill was akin to throwing a bucket of cold water in the faces of the neo-liberal leadership, who are accustomed to getting their way at every turn.  How dare Governor Pence enact the will of his state’s citizens!  Now he is paying the price in full view of the public eye.

In the midst of this media kerfuffle it’s imperative to bear in mind that liberals’ rancor is not about actual discrimination against anyone.  It is about a political loss that they fear might keep them from keeping hold of the power to bully the next Hobby Lobby, the next Chik-fil-A, the next John Q. Public, who fails to follow their one-way, our-way view of freedom in this country.

This is why Mike Pence needs and deserves the support of freedom-loving Americans everywhere.  Regardless of the problems inherent in the RFRA law, regardless of how much pressure is applied by liberal activists and the media, and regardless of how high the political stakes get, Governor Pence must not back down.  The will of the people must not be ignored.  That is what Democracy is all about.

Sometimes a Show is Just a Show