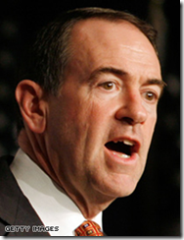 “Sometimes we talk about why we’re importing so many people in our workforce,” the former Arkansas governor said. “It might be for the last 35 years, we have aborted more than a million people who would have been in our workforce had we not had the holocaust of liberalized abortion under a flawed Supreme Court ruling in 1973.”

The language is a little imprecise – what Huckabee meant is that in each of the last 32 years more than 1 million abortions have been carried out in America – and the numbers are a little low – the average number of abortions performed since Roe v. Wade is about 1.4 million per year – but his point is clear:  abortion is the American holocaust.

(This is not only true of America, of course.  Europe’s abortion rate is far higher than ours.)

First I must congratulate Huckabee for standing his ground on this issue.  Politically this is not a move that is going to get him any closer to the White House.  A cynic might see this as positioning for the vice-presidency.  However, I think that it is more likely that Huckabee simply believes this is the correct interpretation of the data.

Personally I agree with him.  Abortion is, in the final analysis, after all the shouting and rationalizing are done with, the ultimate illustration of the strong(er) crushing the life out of the helpless.

Does that mean abortion should be illegal?  No.  It should be limited, as all of our actions are constrained by the codified morality that is the law, but not eliminated.

Americans do mean, heartless things with startling regularity considering that we know better.  Abortion is perhaps chief among them; yet the nature of a democratic society demands that couples have the right to control their destiny for right or wrong.  A reasonable standard should be set after which abortion should be forbidden, as has been done in Europe, and that should be the end of the matter.

That will undoubtedly not happen.  Reading through the comments gives one a fairly good sampling of the views of Americans, for better and worse.

(I assume that CNN filters its comments to remove the repulsive.  Historically such on-line debates have been among the filthiest on the Net.  Therefore, it would be a mistake to think that the extreme positions are represented at CNN’s site.)

Once again, someone without a uterus and/or the possible chance of becoming pregnant through rape or incest, takes their fundamentalist beliefs and wants to force feed the rest of the nation their views. These are the real monsters!

Statistically the percent of abortions performed for reasons of rape or incest is < 1%.  This is not a rational argument.  Is Mike Huckabee a monster?  Hardly.

Mike Huckabee likening abortion to the Holocaust is a slap in the face to every human soul who perished under Hitler.

Is it?  6 million Jewish people were exterminated by little Adolph.  But the number of abortions performed world-wide dwarfs that number in a single year.  Acknowledging that fact is not disrespectful to the Nazis’ victims.

are the deaths of US soldiers and thousands of Iraqi civilians in an illegal and unjust war also not a Holocaust.

Again, the numbers don’t add up, do they?  With regard to U.S. soldiers, the number of abortions performed in the U.S. in a single day is quite close to the total number of U.S. soldiers killed to-date in Iraq.  One day.  If we expand our calculation to include an (inflated) estimate of 100,000 Iraqi dead and dismiss the fact that most were killed by other Iraqis we still need only wait one month for the U.S. abortion count to outstrip the entire number of war dead.

The most important thing we need to establish in this country is a true separation of church and state, and we’re definitely not going to get it with Huckabee. If your reasoning for making a new law or amending the constitution is based on religious grounds then it should be immediately dismissed.

That’s what’s most important?  Not defending our borders?  Not poverty in America?  Not our failing education system?  Not race and integration issues?  Not an aggressive, insidious form of Islam that threatens freedom everywhere it exists?  A bit of perspective would help, I think.

Not necessarily.  While generally true, this statement fails to consider the baby’s right to live after its point of viability and its necessarily feeling pain as a result of being aborted.

This notion also dismisses the rights of the father as if they do not exist.  In a just system, however, a woman would not be allowed to abort a child when her partner is willing to compensate her for costs and inconvenience during pregnancy and assumes all responsibility for the child thereafter.

Granted, that situation may be rare these days.  Nevertheless it should be represented in the debate.

I suppose when a man is able to conceive a child, carry it for nine months, deliver it, nurture it, and experience the personal sacrifice of a woman and mother, then and ONLY THEN will his opinion have any credibility. Since it takes two to conceive, maybe we should look at the other side of the coin and insist that if a woman must experience an unwanted pregnancy, then perhaps the man who impregnated her should be castrated.

Another over-estimation of the importance of the female gender and the rights that it engenders.  Castration would be equivalent to performing forced hysterectomies on women who have abortions.  I haven’t seen that idea anywhere, at least in this country.  Ridiculous.

But there is a distorted reflection of a good idea in there, namely that men who fail to live up to the responsibilities of fatherhood should not be allowed to continue to procreate.  That’s more reasonable, but unlikely to become a national policy.

Given the tenor of the discussion here and other places it seems unlikely that the U.S. will come to any sort of final conclusion to the issue of abortion any time soon.

I admire Mike Huckabee’s beliefs and willingness to stick to them regardless of the criticism they will bring down on him.  I agree whole-heartedly that abortion is a plague on western civilization and I think it will ultimately prove to be our downfall because of higher birth rates in other, less-developed parts of the world.

Yet I am not willing to attempt to dictate to others on the issue.  Ultimately we have to be free to pursue life on our own terms, whatever those might be, respecting only the spirit of the law.

Just as freedom of religion does not mean freedom from religion, the pursuit of happiness does not mean that we shall be happy with every law of the land.  It’s time more people accepted that.

Pope: Abortion not a Right

Clinton Scores, but Not Enough

3 thoughts on “Huckabee: Abortion is the American Holocaust”