Is there any crime more heinous than radical Muslims’ hatred of women?

I doubt that Banaz Mahmod would think so – if she were still alive. 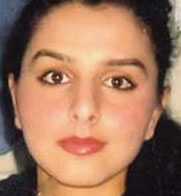 20 years old, beautiful, the victim of a deplorable arranged marriage, and a woman in love with the wrong man, Banaz was raped repeatedly by two Muslim men, one her former “partner” and the other the instigator of a grotesquely brutal, insane crime because she refused to do as she was told.  Worse still, the rapes and murder took place with her own father’s sanction and under the supervision of her uncle.

A Kurdish woman was brutally raped, stamped on and strangled by members of her family and their friends in an “honor killing” carried out at her London home because she had fallen in love with the wrong man.

Banaz Mahmod, 20, was subjected to the 2-1/2 hour ordeal before she was garroted with a bootlace. Her body was stuffed into a suitcase and taken about 100 miles to Birmingham where it was buried in the back garden of a house.

Last month a jury found her father Mahmod Mahmod, 52, and his brother Ari Mahmod, 51, guilty of murder after a three-month trial. Their associate Mohamad Hama, 30, had earlier admitted killing her.

They believed Banaz had brought shame on the family by leaving her husband, an Iraqi Kurd she had been forced to marry at 17, and falling in love with Rahmat Suleimani, an Iranian Kurd.

Her former unnamed partner had raped her as well as repeatedly beating her, the court heard.

Hama, who prosecutors said had been a ringleader in the murder, was caught by listening devices talking to a friend in prison about the murder.

In the recordings, transcripts of which were relayed to the court, Hama and his friend are hearing laughing as he described how she was killed with Banaz’s uncle “supervising”.

“I was kicking and stamping on her neck to get the soul out. I saw her stark naked, only wearing pants or underwear,” Hama is recorded as saying.

The decision to kill her came after a meeting on January 23 — the day before she was murdered — when the family decided to take action before the police could foil their attempts, said prosecutor Victor Temple.

Ms Banaz, 20, had already displeased her family by walking out of an arranged marriage. After she was caught kissing Rahmat Sulemani, an Iranian Kurd, it was decided at a family meeting that they both had to die.

Banaz Mahmod, 20, was brutally raped and stamped on during a two-hour ordeal before being garotted.

Bekhal Mahmod, older sister of the “honour killing” victim Banaz Mahmod, stands very silently in the middle of the room and takes off the black veil that covers her face to reveal jet-black hair and hazel-col-oured almond-shaped eyes which are lively yet so sad they are startling. You know they belong to a young woman in fear of her life.

Across Europe and increasingly, it seems, in Britain, as Muslims become more conservative and religious funda-mentalism strengthens its grip, growing numbers of women are being killed or mutilated in the name of family honour.
In Banaz’s case it happened because in an extraordinary act of defiance against her Kurdish family – welcomed into Britain in the 1990s as victims of Saddam Hussein’s persecution of the Kurds after the first Gulf war – she had walked out of a miserable arranged marriage with an older cousin and fallen in love with another man, thereby bringing “shame” on the family.

Her fate was sealed when she kissed her boyfriend in a Brixton street. The men who had been tasked by her father and her uncle, who was the senior head of the family, with following her photographed this small sign of affection with a mobile telephone.

“It was a kiss on the lips. No, not a snog,” said Bekhal. “But they took a picture of her and gave it to my uncle and that was it. It was all over for Banaz just because she really loved that man.”

Banaz’s tragic case would be terrible if it were unique.  But that is hardly the case.

In 2003, British authorities admitted to only 12 such “honor” killings in the UK but are now re-opening over 100 files of victims of crimes like the one that took Banaz’s life.

Meanwhile, in Berlin 6 Muslim women were murdered for their families’ honor in just a 4 month span in 2005.

By no means is Banaz Mahmod’s case an isolated one.  In fact, it’s quite obvious that there are a great many Muslims who believe that the murder of women who refuse to comply with the orders of the men in their lives is justified or even demanded.

After the murder of Hatin Surucu in Berlin, this little fact came out:

Asked by teachers what they thought of the murder, several 13-year-old pupils are said to have implied that they thought Mrs Sürücü had “earned” her death. “Well, she lived like a German, didn’t she?” remarked one.

She broke with her family, refused to wear the Muslim headscarf and lived with her child in a hostel.

She had recently completed training as an electrical engineer and friends said that she simply “wanted to live her own life”.

The murder has shocked politicians, police and community leaders, and prompted criticism that successive German governments have ignored ritual injustices within immigrant communities for decades. “How many more women have to die before this society wakes up?” asked Necla Kelek, the author of a controversial book on arranged marriages.

Good question, Ms. Kelek, but the query is too limited.  Muslims’ hatred of women is not a British or a German problem, it’s world-wide and endemic to the religion itself.

Hatred, I’ve found, is usually motivated by one sort of fear or another.  I have to believe that Muslim men are afraid – and for good reason – that women who experience freedom of choice in marriage, clothing, employment, etc., will reject the tyranny of their fathers and husbands, leave Islam behind, and take their children with them.

After reading about these and other cases, who in their right mind could blame them?  Are Muslim men so cowardly that they fear the independence of their own women?  Seems so.

The Justice of DNA Evidence