Unity08, an attempt to influence the presidential nominating process on-line, has published a new set of results. A few of the slides caught my interest. First, the slide that ranks the presidential candidates (at the time): 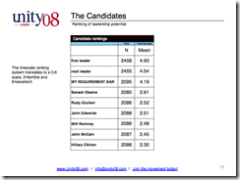 Unity voters are nonplussed by the field, that’s for sure. Obama garnered a distinct preference, which leads me to believe that Unity’s participants are those who lean toward “outsiders”.

Yet the slide ranking the importance of various issues contradicts that notion: 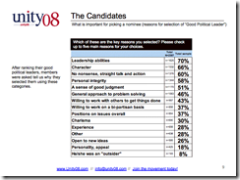 Given this I see no reason for Obama to rank at the top of the previous list. The opposite, if anything.

I’ve seen a lot of interest in Unity on the web but I found it interesting that their survey drew < 20,000 participants (although < 3000 results were published on-line.  Strange.) Not an insignificant number but hardly an-on-line revolution. Another interesting slide is the participant demographic slide. 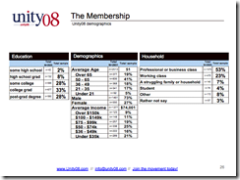 Older, wealthier, better educated, and more male than average. On the whole, it seems to me that Unity08 is not a particularly interesting movement in regard to the larger population or the election process as a whole.

I’m disappointed on all counts, personally. I’d hoped for more.

Public Not Believing Obama re Wright

One thought on “Unity08 Candidate Rankings”