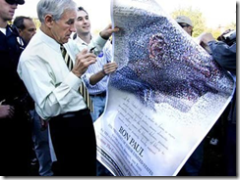 My hometown paper, the Houston Chronicle, got this write-up placed on memeorandum this afternoon:

Republican presidential candidate Ron Paul, the congressman from the Houston area who opposes the Iraq war, has gotten more contributions than any other White House contender from donors identified as affiliated with the military.

According to a Houston Chronicle analysis of campaign records from January through September, Paul received $63,440 in donations from current military employees and several retired military personnel.

Democrat Barack Obama, another war critic, was second in military giving. The Illinois senator got $53,968 during the nine months.

He was followed by Sen. John McCain, R-Ariz, a decorated Navy pilot and former Vietnam prisoner of war, who received $48,208 in military-related giving. McCain has been one of the most vigorous defenders of President Bush’s decision this year to increase U.S. troops in Iraq.

One of the contributors to Paul’s campaign was Lindell Anderson, 72, a retired Army chaplain from Fort Worth, who donated $100 to the Texas lawmaker.

“As a Christian, I think he speaks to a theme that the United States shouldn’t be the policeman of the world,” said Anderson.

Anderson said he strongly disagrees with Republicans who call Paul anti-military: “He spent five years in the military. People in the military have to respect his integrity” whether or not they agree with him on the war.

In my opinion it’s this last point – Paul’s consistent interpretation of the purpose and mission of the U.S. federal government – that strikes a chord with voters.  People understand at a visceral level that they can trust Paul to do what he says he’s going to do.  In today’s political environment that’s far too rare a commodity.

As Jason has written, Paul’s foreign policy is somewhat naive given the present state of world affairs.  That does not mean, however, that his vision is unattainable in the future or that we would be worse off for attaining it.  It simply means that it could not be implemented wholesale at this time.

I find it telling that Paul would bring in more contributions from the military than John McCain.  While it’s not a static-free message it does say that a sizable portion of our military men and women feel the need to make a dramatic change in policy.

I can’t blame them for that.  Unfortunately I don’t see that as being a viable option in the near term.

One thought on “Ron Paul Tops for Military Donations”