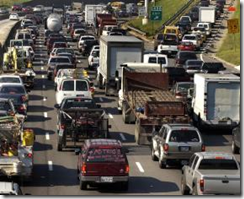 Look familiar to anyone?  The Houston Chronicle says that "traffic congestion in the Houston area and around the country is getting worse".  No kidding.

Some drivers blame the supposed waste of highway dollars on mass transit, or the wrong kind of mass transit. Transit advocates, and some who say they’d ride transit if only it went where and when they want it to, blame the waste of potential transit dollars on concrete.

Peter Wang took a third path, pedaling serenely from his home in Copperfield to a meeting 12 miles away near Dairy Ashford and the Katy Freeway.

"It took one hour, with all of the stop lights, which I did obey," Wang writes. "The gridlock was un-be-liev-able at 7:45 am. I didn’t ride hard; it was pretty leisurely."

Wang figures he made the trip in about the same time a car would probably take, but without the unpredictable delays. The bike may go slower than a car, but at least it keeps wheeling along.

"It really is no fun at all to be in a powerful car capable of 100 mph, except the speedometer says zero."

Let the man gloat. Just wait till it starts to pour down rain, or gets really cold.

But he has a good point: "Bikes are a valid transportation mode … We need to plan to accommodate them."

Very true.  In the U.S., bikes have been traditionally associated with optional play and exercise time and dismissed as a low-tech transportation solution.

I’d like to see that change.  It’s obvious that more bikes than cars can travel down a given stretch of road simultaneously.  Bikes are clearly more friendly to the environment and to our bodies as well.

America is a fat country.  There’s really no other way to say it.  We’re fat.  It’s more than a little sickening, really, to hang around a McDonald’s and watch who is eating what.  Biking to work may not clear those Quarter Pounder-clogged arteries but it sure as heck would let a few people, myself included, fit into last year’s pants.

Unfortunately, Wang’s final point is all-too true:  America’s roads are too dangerous for bikers to use.  In 2005, 784 bikers were killed in traffic accidents, 2% of the U.S. total.  That’s not an unusual number, according to the NHTSA:

Imagine the carnage that would occur if people were to actually use bicycles as a real transportation device given the current mentality of American drivers who, while they may not be bad compared to those in other nations, in many cases do not consider bikes to be a valid use of "their" road.

That attitude would have to change, presumedly through enforcement of traffic laws and punishment of automobile drivers who infringe on the rights of bikers.  Not an easy or popular thing to do, especially in truck-happy Texas, but worthwhile nonetheless.

The Texas Transportation Institute’s 2007 report (PDF alert) for Houston shows that it is the 7th, 8th, or 9th most congested city in the nation, depending on your measure of choice.  The most important one to me personally is the number of hours wasted per year in traffic.  According to TTI, Houston’s number is 56 hours.

That doesn’t sound too bad, really.  Unfortunately it’s complete bull puckey to Joe Suburbs.  Things certainly have not improved since 2001, the year I last commuted regularly to downtown Houston, a 39 mile jaunt that took me 70 minutes, on average, to cover by car.  On Saturday, however, I could easily reach the office in 45 minutes or less, meaning I was losing 50 minutes every day to traffic congestion.  This equates to about 170 hours per year, a number far above the TTI number and one far more relevant to the average suburbanite.

Even if we accept the TTI’s number as valid – California also complained the report understated the problem – over 92 million gallons of gasoline were wasted on congestion-related idling of automobiles.

That’s a lot of barrels of oil, friends, and a lot of money going into Saudi, Iran, and Venezuela – countries that we don’t want to be funding any more than we have to.  We can do more than vote with our wallets if we put our minds to it.  The practical effect of cutting commuter gas consumption by half would be quite telling in the oil market.  Why shouldn’t we work toward that goal?

I understand that transportation entities are unwilling to retrofit existing roads to ensure bike safety.  That would cost a lot of money.  But neither is it acceptable for new road construction to ignore the need for bikes to be used as mainstream transportation devices.  All new roads should provide safe, dedicated bike lanes, particularly those moving traffic to and from living areas to working areas.

It’s only common sense – give bikes the right!

The Real State of the Union: Beyond Bankrupt

4 thoughts on “Ride a Bike, Save Time”