…if the U.S. loses the war in Iraq?  Fox News asked that question of 900 registered voters and came up with what I think is a comforting result (pdf). 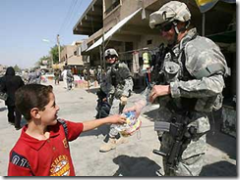 Of particular note is the Fox headline, which screams that almost 20% of Democrats answered “Yes” to the question.

Sure, it’s bad that almost 1 in 5 Democratic voters are deluding themselves.  But the glass is more than half full.  The good news is that over 80% of Democrats are smart enough to recognize the truth when they read it in the form of a binary question.

That’s more than I would have expected.  It hurts, but I guess I have to admit that they’re brighter than I thought.

The poll is also another indication that the strength of the radical progressive strain in the Democratic ranks is significantly overstated, particularly the ultra-liberal web sites.

All in all, very good news.

Islamic Honor Killings On the Rise in Iraq

What We All Want

Iraqi Gays Murdered By Their Own Tribe