Colorado State University’s Board of Student Communications met yesterday and decided that David McSwane, the editor-in-chief of the Rocky Mountain Collegian newspaper, will keep his job after publishing a four-word column that said only, “Taser this: F**k Bush.” 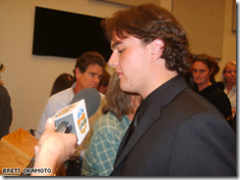 Speaking for the board that oversees student media, CSU faculty member Jim Landers read a prepared statement and refused to comment further.

“We see the editorial as an opinion which is protected by the First Amendment,” Landers read.

However, Landers said the board found that the editor had violated the school’s ethical standards.

“We feel that it caused harm to The Collegian and to student media. It is our judgment that his actions were unethical and unprofessional,” Landers said.

Unprofessional, unethical, harmful.  But not enough to actually do anything about.  No consequences, the hallmark of a liberal institution too cowardly to make a judgment.

So what’s the test?

Simply.  Assuming Hillary becomes president in 2009, would a column consisting only of “Tax this: F**k Hillary” be treated the same way?