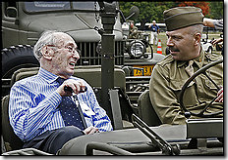 Writing about a group of veterans who were responsible for interrogating Nazi prisoners of war at Fort Hunt during WW II, Petula Dvorak of the Washington Post writes:

Back then, they and their commanders wrestled with the morality of bugging prisoners’ cells with listening devices. They felt bad about censoring letters. They took prisoners out for steak dinners to soften them up. They played games with them.

“We got more information out of a German general with a game of chess or Ping-Pong than they do today, with their torture,” said Henry Kolm, 90, an MIT physicist who had been assigned to play chess in Germany with Hitler‘s deputy, Rudolf Hess.

Several of the veterans, all men in their 80s and 90s, denounced the controversial techniques. And when the time came for them to accept honors from the Army’s Freedom Team Salute, one veteran refused, citing his opposition to the war in Iraq and procedures that have been used at Guantanamo Bay in Cuba.

“I feel like the military is using us to say, ‘We did spooky stuff then, so it’s okay to do it now,’ ” said Arno Mayer, 81, a professor of European history at Princeton University.

Maybe they are.  Precedent is important in American politics and law, sometimes more important than it should be.  So if they were doing it in the days of Harry Truman…

But these veterans have gone on record saying that they didn’t torture Nazi soldiers and sailors.  What then of the equivalency the Bush administration may be trying to draw with their work?

In my opinion the comparison is flawed from the outset.  The enemies of the past are not the same as the enemies of the present.  For one example, the commitment of Muslim terrorists to their god’s commands is much greater than that of captured Nazi prisoners to Hitler’s agenda.

Neither are terrorists’ tactics and chosen battlegrounds equivalent.  Cowards at heart, terrorists who are unable to formulate a legitimate opposition movement deliberately target and kill the innocent in cold blood to convince their opponents that giving up “for now” is easier than fighting.  But the battle does not stop with the first compromise, or the second, or the third.  Fair play does not enter into the equation.  Neither does fear, justice, or the Geneva Convention.  Only victory for Allah matters.

Playing chess with bin Laden, if he were to be caught, would solve nothing.  That’s because there is nothing solve, no secret plan to reveal, no strategy that we can counter by unexpectedly moving our forces to the right place at the right time.  No, all of the terrorists cards are already on the table.  Their mission – that of forcing Islam on the rest of the world – is not a secret.  Only the discrete acts of carnage individual terrorists and small cells plan to commit remain hidden.

Are we to fight them using rules from a by-gone age, rules that were negotiated with opponents who shared our fear of falling into enemy hands?  Can we, knowing the new enemy fails to observe these rules?  Knowing that the terrorists actually use our principles against us when calculating how much they dare risk when attacking us?

The answer is, “Yes, to a point.”  When there is no imminent threat of large-scale terrorist action there is no reason to torture prisoners of whatever stripe.  But given a probable threat of near-term mass murder, is not virtually any act against an individual enemy combatant justified to save a large number of lives?

I analyzed it this way a few months ago:

Given an 80% probability that 5 million New Yorkers will be incinerated in a nuclear jihad in less than 2 hours, no responsible federal agent, supervisor, director, or president can allow himself the luxury of leaving the torture card in his hand, unplayed, while the clock ticks.

While distasteful and counter-productive if used indiscriminately, the torture of enemy combatants must be undertaken in certain circumstances. In the final analysis, it’s simply matter of mathematics:

I see no reason to change that assessment.  Even if one doesn’t trust the CIA and reduces the likelihood of the threat significantly the math simply doesn’t justify doing nothing.

Understand that I’m not saying that captured terrorists should be given the hard treatment from the get-go.  They should have the chance to tell the truth in response to simple questioning, non-violent psychological ploys, and mild interrogation techniques before that happens.  (I could be off base but I’m confident that is the case now.)

But if the stakes are are high enough and the information credible enough, physical defense must take precedence over ethical equivocation.

The WW II vets have earned the right to disagree.  They have lived twice as many years as I have; their opinions are probably worth twice what mine is.  But I’m not sure these gentlemen understand the nature of the new enemy, their utter rejection of our notion of honor, or the intensity of their fervor to destroy and dominate us.

It’s true that the Muslim terrorists cannot defeat the west in a war of military might today.  At the moment it’s not even close.

But one thing we should all remember – and what the vets seem to have forgotten – is that the Nazis were a feeble strain once, as were the Communists in China and the Bolsheviks in Russia.  None of these gangs of morally deficient, murderous thugs should have been able to defeat the existing powers but they succeeded anyway.  How?  They simply wanted to win more.  They understood that they were willing to do anything in order to succeed and they did.  Anything.

Torture is a hideous thing.  But there are things still worse.  Hitler.  Stalin.  The Killing Fields.  The Khmer Rouge.  The Cultural Revolution.  The list of ideologically-motivated genocides is a long one and George W. Bush’s name isn’t even close to being on it, not if the writers of it are telling the truth.

Proper Use of Technology

How to Properly Report on Crime