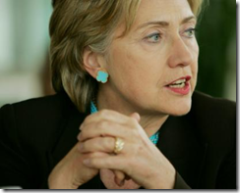 Various publications are saying that Hillary Clinton has gone on the record as saying that she would reduce presidential powers back to the pre-W levels if she is elected president.

“I think you have to restore the checks and balances and the separation of powers, which means reining in the presidency,” Clinton told the Boston Globe’s editorial board.

“It has been a concerted effort by the vice president, with the full acquiescence of the president, to create a much more powerful executive at the expense of both branches of government and of the American people.”

Clinton said, “There were a lot of actions that they took that were clearly beyond any power the Congress would have granted or that in my view that was inherent in the Constitution.”

She said if elected in November 2008 she would undertake a review with an eye toward giving up these powers.

“I think I’m going to have to review everything they’ve done, because I’ve been on the receiving end of that,” she said. Ms Clinton stated it was “absolutely” conceivable that, as president, she would give up executive powers in the name of constitutional principle.

“That has to be part of the review I undertake when I get to the White House, and I intend to do that,” she said.

The question is this:  Does Hillary actually have the intention to surrender her future office’s authority once she attains it?

Read the transcript of the Guardian’s interview with Clinton and make up your own mind.

I don’t see anything in the text that can be construed as a promise to do anything beyond participating in a review of the current policies.

Hillary giving up presidential power would be going against type.  That is not to say that it couldn’t happen; however, what she actually promised to do is a long, long way from what she’s being given credit for in the media.

It’s also a statement made from the other side of the power divide.  When and if she crosses over the “review” will likely be forgotten.

That would be unfortunate.  The internal security restrictions and privacy reductions implemented by the Bush administration should, in my opinion, be rolled back and Hillary is the only credible candidate who might do that.

Obama Makes History – Now on to What Matters