At Slate, Christopher Hitchens defends the use of the term “Islamofascism” to good effect. 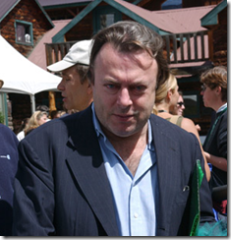 Hitchens first takes on the faux-intellectuals who refuse to make the obvious connection between modern, radical Islam and manner of life that imposes on those unlucky enough to fall under its sway:

It’s quite the done thing, in liberal academic circles, to sneer at any comparison between fascist and jihadist ideology. People like Tony Judt write to me to say, in effect, that it’s ahistorical and simplistic to do so. And in some media circles, another kind of reluctance applies: Alan Colmes thinks that one shouldn’t use the word Islamic even to designate jihad, because to do so is to risk incriminating an entire religion. He and others don’t want to tag Islam even in its most extreme form with a word as hideous as fascism. Finally, I have seen and heard it argued that the term is unfair or prejudiced because it isn’t applied to any other religion.

Well, that last claim is certainly not true. It was once very common, especially on the left, to prefix the word fascism with the word clerical. This was to recognize the undeniable fact that, from Spain to Croatia to Slovakia, there was a very direct link between fascism and the Roman Catholic Church. More recently, Yeshayahu Leibowitz, editor of the Encyclopaedia Hebraica, coined the term Judeo-Nazi to describe the Messianic settlers who moved onto the occupied West Bank after 1967. So, there need be no self-pity among Muslims about being “singled out” on this point.

Personally I don’t find this bit of writing particularly compelling.  But then again it must necessarily require considerable dilution to distill the decades, even centuries, of leftist propaganda against the Judeo-Christian religion to a single paragraph such as this.

I think the point, however, is not whether this has been done in the past or not – obviously it has – but that the cause, namely the facilitation of a repressive social order, precedes the effect, which is the application of the label.

In this regard, Hitchens drives straight to the point by comparing the observable effects of facism and Islam:

The most obvious points of comparison would be these: Both movements are based on a cult of murderous violence that exalts death and destruction and despises the life of the mind. (“Death to the intellect! Long live death!” as Gen. Francisco Franco’s sidekick Gonzalo Queipo de Llano so pithily phrased it.) Both are hostile to modernity (except when it comes to the pursuit of weapons), and both are bitterly nostalgic for past empires and lost glories. Both are obsessed with real and imagined “humiliations” and thirsty for revenge. Both are chronically infected with the toxin of anti-Jewish paranoia (interestingly, also, with its milder cousin, anti-Freemason paranoia). Both are inclined to leader worship and to the exclusive stress on the power of one great book. Both have a strong commitment to sexual repression—especially to the repression of any sexual “deviance”—and to its counterparts the subordination of the female and contempt for the feminine. Both despise art and literature as symptoms of degeneracy and decadence; both burn books and destroy museums and treasures.

Both these totalitarian systems of thought evidently suffer from a death wish. It is surely not an accident that both of them stress suicidal tactics and sacrificial ends, just as both of them would obviously rather see the destruction of their own societies than any compromise with infidels or any dilution of the joys of absolute doctrinal orthodoxy.

Certainly that seems to be the case; observation of Islamic terrorists in Iraq, Afghanistan, Israel, and other places shows that the tactics of self-sacrifice are quite common.  It follows that those who practice suicide attacks believe fervently in their cause, far more than they can or will analyze its rightness or probability of success.

It is therefore necessary for Islamists to destroy everything that transcends it.  This is why schools, books, statues, and non-Islamic traditions must be scoured from men’s minds.  Such things expose the rude, almost pre-historic nature of Islam for what it is, a relic from older, darker days best forgotten.

Yet this strain of Islam is the one that seems to be gaining the most converts.  Certainly it garners the most press coverage and kills the most innocent people.  It is also the Islam that rules the mosques in Iran and the streets in Pakistan.  It is the feet that run the terrorist agenda in Iraq and the hands that severed Daniel Pearl’s head from his shoulders.  The only hope of compromise with such people comes from their own kind, Muslims who reject the tyranny of their homicidal brethren.

Do such people exist?  Surely.

Do they have the numbers, authority, courage, power, and opportunity to change the direction of modern Islam?  Seeing as how they tend to end up dead, I doubt it.

To me this is the point of Hitchens’ comparison:  Hitler’s thugs were little more than brutal punks with dreams of forcing the world into their rigid, stunted view of an ordered society.  In our time militaristic Islam is no different save for its adherents’ greater, religiously-fueled fervor and their increased proximity to weapons of mass destruction.

I find it annoying that we are still bantering about words.  Islamofascism is a fact of the 21st century.  By that name or another the movement exists and must be acknowledged and countered from within or without.

Regarding the latter, western liberals, who have more than anyone to lose in the face of a rising Islam and who are particularly at risk in a seemingly paralyzed Europe, must abandon the foolish notion that the greatest threat to their humanistic ideology is the Christian religion.

This is nonsense.  Save for the offended few at the fringes of western society nothing could be farther from the truth.  In most ways Christianity, capitalism, and science have been quite compatible and their synthesis has led to the greatest period of freedom and prosperity in human history.

Liberals who, wittingly and otherwise, protect and promote the Islamofascist agenda using politically correct denials of these unpalatable realities would do well to remember that.