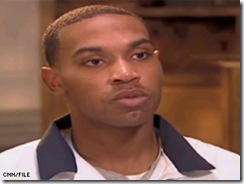 As the Atlanta Journal-Constitution reports, a uniquely stupid chapter in the story of the American legal system is drawing nearer to a close.

The Georgia Supreme Court on Friday ordered the release of Genarlow Wilson, the Douglas County man who has been serving a controversial 10-year sentence for having consensual oral sex with a 15-year-old girl when he was 17.

The court’s 4-3 decision upholds a Monroe County judge’s ruling that the sentence constituted cruel and unusual punishment under both the Georgia and U.S. constitutions.

The majority opinion said the sentence appeared to be "grossly disproportionate" to the crime and noted that it was out of step with current law.

Wilson was expected to be released Friday afternoon from Al Burruss Correctional Training Facility in Monroe County, according to his lawyer.

This decision is long overdue, considering the facts of the "crime" of which Wilson was convicted.

"Although society has a significant interest in protecting children from premature sexual activity, we must acknowledge that Wilson’s crime does not rise to the level of culpability of adults who prey on children …" wrote Supreme Court Justice Leah Ward Sears in the majority opinion.

She said that "for the law to punish Wilson as it would an adult, with the extraordinarily harsh punishment of 10 years in prison without the possibility of probation or parole, appears to be grossly disproportionate to his crime."

Also true.  But are there other facts to consider about Wilson’s case?

Actually, yes.  What most major media and blogs no longer discuss is that Wilson videotaped himself having sex with another, older girl that night, a girl who was probably under the influence of drugs and woke up claiming that Wilson had raped her.

Wilson was acquitted of this charge but given a severe sentence with regard to the underage girl.  Legally this was based on Georgia’s "aggravated" child molestation law, aggravated in this case meaning oral sex.  Why Wilson was charged with this harsh, felony violation rather than a more appropriate misdemeanor is a mystery.  Many have conjectured that it was because Wilson is black, although I think it likely that prosecutors considered the other girl’s case, the video tape, and the drugs/alcohol involved when making their decision.

Wilson was convicted, sentenced to 10 years without possibility of parole, and locked up.  The irony, which most of us know well, is that if Wilson had had intercourse with the girl he’d have been sentenced to no more than 1 year.

Last year Wilson won an appeal that should have freed him but Attorney General Thurbert Baker elected to appeal that ruling, setting the stage for the state Supreme Court to act today.

he will "respectfully acknowledge" the state Supreme Court’s decision.

"I hope the court’s decision will also put an end to this issue as a matter of contention in the hearts and minds of concerned Georgians and others across the country who have taken such a strong interest in the case."

That’s one way of putting it.

Another is that the decisions made by prosecutors in the case were highly questionable at best.  By electing to go after Wilson the state made a joke of itself and the American legal system, something that’s not easy to do these days, and by failing to back off of the case when Wilson’s release became all but inevitable just made the problem that much worse.

The irony is that Wilson is anything a poster child for African-American males’ problems with the legal system, despite how he’s consistently portrayed.  Yes, he was punished too harshly.  No, he was not innocent.  Hardly that, considering the contents of the infamous video tape.

Seems like everything except justice was served in this case.

One last question remains:  Given that the state Supreme Court was restricting its examination to the child molestation conviction, why did 3 justices vote to uphold Wilson’s conviction?

The Cad Who Got What He Deserved