Christi Hardin Smith posted a transcript of a “great” speech that Christopher Dodd gave on the floor of the Senate today here. 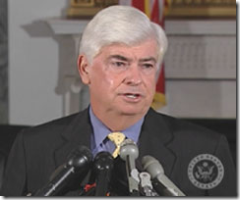 Dodd spoke passionately about a sweeping array of war-related topics, bouncing around from between FISA, Iraq, Abu Ghraib, Guantanamo Bay, Alberto Gonzales, and even Nuremberg, but that didn’t make the speech great or even unique.  It’s simply splicing together of Democrats’ few talking points.

But when he was on message Dodd did make good points about the new FISA bill that’s in committee now:

For six years this President has used scare tactics to prevent the Congress from reining in his abuse of authority. A case and point is the current direction this body appears to be headed as we prepare to reform and extend the Foreign Intelligence Surveillance Act.

Many of the unprecedented rollbacks to the rule of law by this Administration have been made in the name of national security.

And today, it appears that we are prepared to consider the proposed renewal of the Foreign Intelligence Surveillance Act – a law that in whatever form it eventually takes will almost certainly permit the Bush Administration to broadly eavesdrop on American citizens.

Legislation, as currently drafted, that would grant retroactive immunity to telecommunications companies that helped this Administration violate the civil liberties of Americans and the law of this country.

Mr. President while it may be true that the proposed legislation is an improvement on existing law, it remains fundamentally flawed because it fails to protect the privacy rights of Americans or hold the Executive or the private sector accountable if they choose to ignore the law.

That is why I will not stand on the floor of the United States Senate and be silent about the direction we are headed.

The damage that was done to our country on 9/11 was stunning. It changed the world forever.

But when you start diminishing our rights as a people, you compound that tragedy. You cannot protect America in the long run if you fail to protect our Constitution. It is that simple.

That is the truth, whether spoken by a Democrat or Republican, liberal or conservative.

In my opinion Democrats should quit nattering after the telecoms past misdeeds and concentrate on what is really important – protecting privacy and civil liberties in the future.  Does Dodd pretend that he’d have refused the pressure put on the companies by the executive branch if he’d been the CEO of one?  Please.

Dems should negotiate on that point to win concessions elsewhere in the bill.  And above all they should not give in to the administration’s demands to make the expanded rules permanent.

I think the Democrats will hold up on that last point, though as Dodd pointed out, speaking about the administration’s use of extra-legal power:

each has only been possible because Congress has not been able to stop this President’s unprecedented expansion of executive power, although some in this body have tried.

Congress has been absolutely ineffectual at stopping the administration’s prosecution of the wars or moderating its techniques.  Dodd blames this failure on “scare tactics”.

Strangely, scare tactics only work if:

A) you disagree but are actually scared (i.e., there’s something to scared of)

B) you agree with the underlying message

C) you’re playing politics instead of opposing a bad policy

I’ve always felt that the issue for Democrats was a combination of all of the above.  A sizable number of them want to fight Bush on these issues; however, many Democrats realize that the president is more or less doing what needs to be done and when push comes to shove they have to go along – because doing anything else would be irresponsible.

I am well aware that this issue is seen as political. I believe that Democrats were elected to strengthen the nation – elected to restore our standing in the world.

If so, he’s wrong.  Democrats were elected because we were and are wasting billions of dollars and thousands of lives in Iraq and people were pissed off.  We voted against Republicans, not for Democrats, neither of whom have done anything to earn our confidence or support since then.

Dave Helfert, a former Appropriations spokesman who now works for Rep. Neil Abercrombie (D-Hawaii), thinks he has the answer to that problem:

Democrats are losing the battle for voters’ hearts because the party’s message lacks emotional appeal, according to a widely circulated critique of House Democratic communications strategy.

His memo is sharply critical of Republican policies but also suggests a neurological explanation for Republican message success: By using emotional appeals and warning of dire threats, Republicans can trigger neurons called “amygdalae” in the temporal lobe, which is the seat of the “fight or flight” response in the brain.

Triggering the temporal lobe – hilarious.  Not unlike pulling heartstrings to get welfare spending programs through Congress, I suppose.

But rather than comparing messages with their rivals and trying to put a new rhetorical spin on their polices, Democrats should simply concentrate on doing what is right.

Health care costs, education reform, balancing the budget, immigration reform – these are all issues that ordinary Americans like me expect them to take on and address instead of strutting around puffing up their chests at the president over troop funding, only to back down again and again.

Dealing with the issues would certainly be much more effective at boosting their abysmal approval ratings than bickering over what data the telco’s should or should not have turned over to the government years ago.

‘To be white is to be racist, period,’ a high school teacher told his class