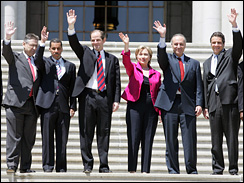 Officials familiar with the decision told The Associated Press Tuesday night that Spitzer is due to meet Wednesday morning with New York’s congressional delegation, many of whom have openly opposed the program.

The governor’s office signaled to New York lawmakers Tuesday that he will say at the Wednesday morning meeting that he is shelving the plan and that immigration is a federal issue to be handled by Washington, according to congressional aides who spoke to the AP on condition of anonymity because no formal announcement had been made.

Hillary said that the plan "makes a lot of sense" in the last Democratic presidential debate and then backtracked on her comments the next day, with good reason.  The plan made no sense at all and Spitzer, who should have known better, was about to be told that today:

Officials familiar with the decision told The Associated Press Tuesday night that Spitzer is due to meet Wednesday morning with New York’s congressional delegation, many of whom have openly opposed the program.

Why?  Because their constituents hated the idea, naturally.

Nine in ten voters have read or heard about the Governor’s plan. By a margin of 70 to 25 percent they oppose it (down slightly from 72-22 percent last month). More than half of every demographic group – including Democrats (55-36 percent) – oppose the Governor’s plan. When questioned on the revised three-tiered license plan, voters oppose it by a 65-28 percent margin.

Two-thirds of voters say driver’s licenses are a privilege and not for people here illegally. Nearly two-thirds disagree with the argument that the plan will make roads safer and reduce insurance costs. Half believe that making licenses available to illegal aliens poses a national security threat.

"Voters think the Governor is wrong on the policy and on the rationale for the policy," [Siena New York Poll spokesman Steven] Greenberg said.

An Injustice Rectified and What It Ought to Symbolize