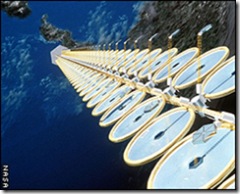 The BBC has a cool article about the relative feasibility of using a low-orbit solar array as a source of renewable energy here.

A recent study by the Pentagon concluded that a solar array in space was close to being technologically feasible, and robotics should soon make the building of large structures in space safer and quicker.

Leopold Summerer of the European Space Agency believes the generation of solar power from space may be only 20 years away.

But he adds that the cost of the undertaking will mean it will have to be another international effort along the lines of the Space Station.

That project is, as most readers know, not not scheduled to be completed for another 2+ years.  Do Europe and the U.S., which has provided more funding for the project than any other country, have the stomach for another large, high-risk project with uncertain returns?

Space stations and solar arrays are the stuff of scientists’ – and many libertarians’ – dreams.  Writing about this last, Kay Hymowitz had this to say in the WSJ:

Libertarians come in many flavors, of course, but they share certain enthusiasms beyond free-market economics. They are often great consumers of science fiction, with an avid interest in space travel. And they have an almost unlimited enthusiasm for biotechnology, especially for advances that might allow us to manipulate our natures and extend our lives. Taken together, these elements constitute what might be called the libertarian dream–the dream of shaping your own meaning, liberated from family, from the past, from tradition, from biology, and perhaps even from the earth itself.

At the risk of being branded with the “l” word, I have to say that I’m all for the project.

The U.S.’s contribution to the ISS will be about $35B by the time it is finished (not counting the maintenance costs over its estimated 8 year life-span).  That’s a mere drop in the bucket for a House that just passed a $516B budget bill that includes over $7B in pork/earmarks.

According to scientists, the solar array is doable.  Robert Laine from EADS Astrium, the Anglo-French space company says:

“It’s a matter of developing the technology to make the solar panels cheaper, to send them into the sky and have the energy conversion to microwaves or optical lasers which then beam the energy down to Earth.

“All of that is demonstrated to be technically feasible. Again it’s a matter of economics”.

It’s unclear whether a solar array project would play a meaningful role in the effort to make western nations more energy independent or not.  Yet what is obvious is that we need to seed a hundred or a thousand or ten thousand different ideas in order to ensure that we make the advances that we must make.

One thing is certain:  There’s no mystery as to where continuing to depend on Saudi Arabia, et al, will lead us.

China to be on Moon before U.S.?