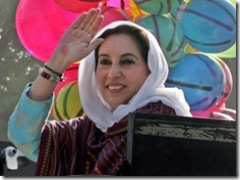 When Benazir Bhutto first decided to return to Pakistan to attempt to reclaim power I commented on a post by Kevin Sullivan to the effect that her return was more likely to lead to blood in the streets than democracy.

Sadly, that rather obvious guess has proven true:  Benazir Bhutto is dead, killed by an suicide assassin at a political rally in Islamabad.

Has hope for democracy and freedom in Pakistan died with her?

Personally I don’t think so.  Ms. Bhutto, the daughter of former premier Zulfikar Bhutto, was a popular public figure and the nearest thing to royalty that the Pakistani nation could look toward.  Twice elected to be the country’s prime minister, Bhutto was also allegedly corrupt – she was removed from office on both occasions, smeared by a damning paper trail of circumstantial evidence.

Ms. Bhutto was, in other words, the inspiring but flawed leader at the head of a sizable contingent of people, idealists who surely still want more for their country than for it to merely be the home of radical killers whose ideas consistently lead only to the death and destruction of their bettors.

I do not believe that her supporters will allow her dream for a democratic, secular Pakistan to die with her.

Mark Steyn says that “Benazir Bhutto’s return to Pakistan had a mad recklessness about it which give today’s events a horrible inevitability.”

Her death was, I think, the only way that her bid for power in Pakistan could possibly have ended.  The radical Muslims who would see Pakistan turned into a nuclear theocracy and who will not rest until this vile goal has been achieved would not and could not accept Benazir Bhutto as their superior.

From an Islamist point of view, when we try to export our influence to Islamabad, it’s a bust. When they try to export their influence to the west – via the perpetrators of the London Tube bombing, the Daniel Pearl killing, etc – they seem to have rather more luck.

That is because we seek to create while our enemies need only destroy.  Like the mad acts of a petulant child, their rage is at once incomprehensible and uncontrollable.

Surely Ms. Bhutto knew this, particularly after being welcomed home with a bomb attempt on her life that killed more than 150 people.

Why then did she persist?  Perhaps because she recognized that the radicals who demanded her death must be opposed at every turn in order to keep the light of freedom from going out.

Whether in Pakistan, Afghanistan, Iraq, Israel, or Europe, democracy is under attack from an enemy that has no respect whatever for the principles of individual rights, legal protections, or representative government.  These proponents of literal Islam actively seek to destroy what generations have labored so tirelessly to build.  Ms. Bhutto’s murder – among with so many others – clearly demonstrates the fact that they will stop at nothing.  In turn we must respond in kind.

Ultimately this knowledge, if we can integrate it into our individual understanding of the world and our nations’ policies, may be Benazir Bhutto’s greatest gift to the world.

Joke Guaranteed to Piss Off a Muslim