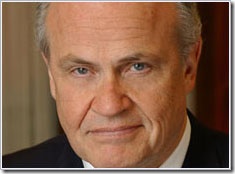 Fred Thompson, straggling behind the Republican pack as he has been in recent weeks, has not attracted as much negative attention from the liberal crowd as the other, more popular candidates.  But while he’s still ing 4th place, Thompson is polling reasonably well in South Carolina with 16% of the vote.  That’s enough to get him the attention – and the resulting barbs – of today’s #1 SIM (Self-important Mudslinger), Michael Gerson of the Washington Post.

Gerson’s thesis:  Fred Thompson is obviously a morally inferior person and unfit to be president because Thompson does not place the same importance on funding AIDS mitigation in Africa as he does.

To make his point that Thompson "lacks moral seriousness", he uses Thompson’s own words:

"Christ didn’t tell us to go to the government and pass a bill to get some of these social problems dealt with. He told us to do it," Thompson responded. "The government has its role, but we need to keep firmly in mind the role of the government, and the role of us as individuals and as Christians on the other."

Thompson went on: "I’m not going to go around the state and the country with regards to a serious problem and say that I’m going to prioritize that. With people dying of cancer, and heart disease, and children dying of leukemia still, I got to tell you — we’ve got a lot of problems here…"

That’s obviously true, what with the current financial issues in the lending market, wars in Iraq and Afghanistan, a declining but still obscene rate of 1.2 million abortions per year, a mediocre education system, and an ongoing health care/insurance debacle demanding attention.  Yes, the next American president will have a full plate of top-priority issues, regardless of who wins the election.

Gerson’s use of the AIDS issue as a weapon to bash a second-tier Republican candidate is biased journalism of the worst kind.  His article abjectly fails the smell test because his entire premise is based on a lie, namely that AIDS funding in Africa is a national priority for America.  It’s not.  Nor should it be.  But that doesn’t stop Gerson from pulling out all the stops:

Thompson also dives headfirst into the shallow pool of his own theological knowledge. In his interpretation, Jesus seems to be a libertarian activist who taught that compassion is an exclusively private virtue. This ignores centuries of reflection on the words of the Bible that have led to a nearly universal Christian conviction that government has obligations to help the weak and pursue social justice. Religious social reformers fought to end child labor and improve public health. It is hard to imagine they would have used the teachings of Christ to justify cutting off lifesaving drugs for tens of thousands of African children — an argument both novel and obscene.

Support for the fight against AIDS is not a matter of being a "Christian" or a "conservative" — or a liberal or a Buddhist. It is an expression of compassion and empathy, which also reflects a serious conception of America’s role in the world.

These attributes are not only admirable in a president; they should be required.

Why is Gerson working so hard to slime a 4th place candidate?  Perhaps he truly wants more AIDS funding for Africa and is merely bare-knuckle brawling his way toward that goal.  Or perhaps Gerson, like so many liberals, is possessed of a deep, visceral hatred for anyone who dares to declare that the American federal government should not unnecessarily be involved in the business of wealth redistribution.

In light of Ron Paul’s recent troubles with alleged racism, the word "libertarian" has many negative connotations and it’s no accident that Thompson is tagged with it here.

Libertarian = kook -> vote for someone else.  Easy.  Too bad it’s wrong.

Fred Thompson is, in my view, a true fiscal conservative of the type most hated by liberals.  As such he’s an immediate target for their guilt-riddled spittle, particularly when he makes, what from the perspective of a committed liberal, can only be described as the faux pas of mentioning his Christianity aloud.

The dichotomy for liberals, one that they too almost always fail to recognize, is that faith, as they understand it, is always a private matter – except when it comes time for the collection agent of the public, the federal government, to pass the plate and use the billy-club of the law to "encourage donations".  Then one’s Christianity is all about serving the public, supporting the common good, and doing your duty.  Why?  Because you are not morally serious if you don’t believe that it’s the government’s responsibility to solve most or all problems and fall silently into line behind them.

All of this is patently ridiculous, as is Gerson’s assertion that there is a "nearly universal Christian conviction that government has obligations to help the weak and pursue social justice."

Salvation, Mr. Gerson ought to realize, has nothing to do with actions that the federal government takes on our behalf or that we perform under duress.  There is no virtue in taxation, none at all, even for the demagogues who champion welfare and other massive "financial redistribution" programs.  Neither is there compassion in voting for these fiscal profligates, only a temporary assuaging of the guilt some men feel for having been blessed and for which there is only one remedy – getting out there and actually helping someone one-on-one.

Contrary to Mr. Gerson’s writing, one’s salvation, the compassion it engenders, and the good works that follow are entirely individual.  None of these essential elements of Christianity can be divorced from the individual and transferred to the collective without their value being entirely lost.

The irony of this discussion is Fred Thompson would no more cut off the flow of American money to Africa than any other presidential candidate, Republican or Democrat would.  He might not increase funding as much as, say, Barack Obama, the current liberal de celebre, but like most governmental largesse this money isn’t going to be pulled back ashore by anyone.

Gerson would – and should – know this if he has an objective point of view and an inclination to use it.

These are attributes that are admirable in a journalist; they should be required by all reputable publications.

Public Not Believing Obama re Wright

One thought on “Self-Important Mudslingers”