There is a direct connection between the legal machinations some call "lawfare" that have ensnared high-profile Canadian writers Ezra Levant and Mark Steyn and the violence perpetrated around the world on a daily basis.  That connection is, of course, the religion of Islam, which either has been co-opted into a vehicle for terrorism or has simply rejuvenated its plans to inflict itself on the rest of the world, depending to whom one listens.

Ezra Levant is presently being dogged by the Canadian Human Rights and Citizenship Commission, that country’s bureaucratic version of the Thought Police.  His story is summarized nicely by Janet Albrechtsen here.

"No six-foot brownshirt, no police cell at midnight. Just Shirlene McGovern, an amiable enough bureaucrat, casually asking me about my political thoughts on behalf of the Government of Alberta. And she’ll write up a report about it, and recommend that the Government do this or that to me. Just going through checklists, you see … a limp clerk who was just punching the clock. She had done it dozens of times before and will do it dozens of times again. In a way, that’s more terrifying."

Steyn has been summoned before two different commissions of the same stripe as a result of Maclean’s published an excerpt from America Alone.

The public inquisition of Steyn has triggered outrage among Canadians and Americans who value free speech, but it should not come as a surprise. Steyn’s predicament is just the latest salvo in a campaign of legal actions designed to punish and silence the voices of anyone who speaks out against Islamism, Islamic terrorism, or its sources of financing.

The Spectator article absolutely must be read in its entirety.

Islamists with financial means have launched a legal jihad, manipulating democratic court systems to suppress freedom of expression, abolish public discourse critical of Islam, and establish principles of Sharia law. The practice, called "lawfare," is often predatory, filed without a serious expectation of winning and undertaken as a means to intimidate and bankrupt defendants.

THESE SUITS REPRESENT a direct and real threat to our constitutional rights and national security. Even if the lawsuits don’t succeed, the continued use of lawfare tactics by Islamist organizations has the potential to create a detrimental chilling effect on public discourse and information concerning the war on terror.

Already, publishers have canceled books on the subject of counterterrorism and no doubt other journalists and authors have self-censored due to the looming threat of suit. For its part, CAIR announced an ambitious fundraising goal of $1 million, partly to "defend against defamatory attacks on Muslims and Islam." One of CAIR’s staffers, Rabiah Ahmed, bragged that lawsuits are increasingly an "instrument" for it to use.

Similarly, Susan Duclos wrote an excellent, detailed piece about Ezra Levant’s legal problems and the deliberate way in which he has been targeted for legal harassment by Muslims who allegedly believed that Levant incited his readers to violence by his publication of this image in the Western Standard: 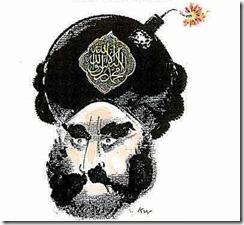 It is understandable that Muslims are offended by this image.  Susan makes this point clearly and offers some unpleasant pokes at Christian and Jewish religions as a talking point, correctly saying that these groups have dealt with much worse than this and have not responded with deadly threats such as those issued by Muslims.

It is undeniable that the Mohammed drawing contains truth as well.  Both aspects of the artist’s and editor’s means of communication – offense and truth – should be supported by every beneficiary of free speech.  This is particularly true of the major media providers, though as Stanley Kurtz points out, the Canadian media has been anything but vociferous in Levant’s defense thus far.

As for the United States, Levant’s case could just as well be happening in Outer Mongolia for all of the attention that has been drawn to it thus far.  Yet as Janet Albrechtsen says, the disease of passive acceptance of multicultural relativism is in danger of spreading out of Europe and Canada to Australia and the United States:

Canada shows where we will end up in due time: with a system of governance where large swaths of social policy have been delegated by parliament to the unelected grey bureaucrats, who get to implement "progressive" policies that could never get through a body of elected politicians.

As the jurisdiction of these commissions expands into areas never originally intended, fundamental freedoms contract. When state bodies start enforcing the religious prohibitions of Muslims, which forbid the depiction of the prophet Mohammed, it destroys a few fundamental Western values, namely the separation of mosque and state and, more critically, the freedom of speech.

At times like these it must seem to Levant and Steyn that they are utterly alone in knowing the value of free speech and how essential it is that it be maintained.

Mark Steyn certainly remains unrepentant, as well he should:

"I don’t want to get off the hook. I want to take the hook and stick it up the collective butt of these thought police."

Awesome, in a word.  Truth should never be sacrificed for expediency, though few of us could blame either man if he were to fold under the weight of the full pressure of his country’s government.

Doing so would hurt each and every one of us more than we can know, for the lawfare aspect of the Muslim terrorists’ attack on western civilization would be given a massive boost in momentum by such a victory.

The American Spectator says exactly that in plain language:

Islamists with financial means have launched a legal jihad, manipulating democratic court systems to suppress freedom of expression, abolish public discourse critical of Islam, and establish principles of Sharia law. The practice, called "lawfare," is often predatory, filed without a serious expectation of winning and undertaken as a means to intimidate and bankrupt defendants.

Albrechtsen says that too many rights make a wrong.  There is a certain truth to that statement.  But there’s a more fundamental truth that should be recognized, that it is both necessary and right to make judgments in favor of our way of life and against that of enemies that would destroy it.

Levant’s attackers, as well as Steyn’s, are counting on the weakness inherent in politically correct thought to win a precedent-setting victory on which they can launch further attacks designed to limit the free speech rights of westerners in their own countries.

2 thoughts on “Lawfare vs. Free Speech”