…because if I was a resident of the "Show Me" state, I’d be in the right place for the new President of the United States of America to make good on his promise to lead this country the way it should be led.  You’re the man, Barack Obama – show us what you can do! 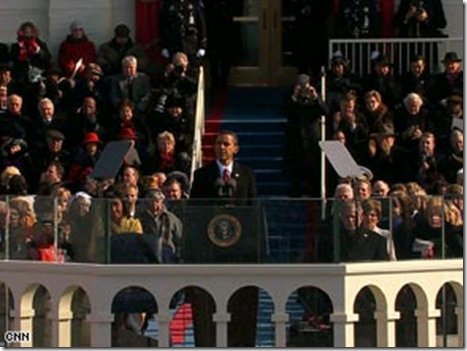 Needless to say it won’t be easy to rise above the low level of political debate.  For one example, the hot topic on the web is whether Chief Justice John Roberts or President Obama botched his respective lines during the swearing in.  Who cares, Josh Marshall?  Why waste CPU cycles and brain power on bullshit like that?

It’s time to move on with the Obama agenda and, if necessary, the loyal opposition to it.

John Cornyn of Texas is eager to oppose Obama, it seems, since he’s planning to block Hillary Clinton’s confirmation as Secretary of State on the day of President Obama’s inauguration.  More politics as usual, which is another way of saying that Cornyn is grandstanding for no purpose other than his own aggrandizement.  Way to make the folks back home proud, Mr. Cornyn!

The same goes for Rush Limbaugh who last week said, “I disagree fervently with the people on our [Republican] side of the aisle who have caved and who say, ‘Well, I hope he succeeds.’”

Any casual observer of current events knows that President Obama is taking over at an unpleasant moment in American history.  We all need this president to succeed.  If Obama keeps his promise to govern from the center and work to get support, if not approval, from some of the Republican base, then he will be successful and government will begin to function again.

If he does not keep that promise, the next 4 years could make Bill Clinton’s second term look like a lady’s tea party.  But there’s no reason to start the partisan mudslinging yet.  After all, he’s only been in office for 3 hours!

Yes you did!  Now you have to make good on it, Mr. Obama.

There You Go Again, Jimmy