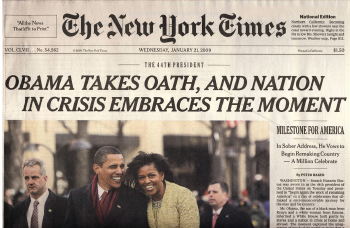 The United States’ first black president has taken office.  On many levels this is a good thing, though I daresay it would be better if the historic election had brought a fiscal conservative to the White House, particularly at this uneasy moment in our history.

Even so, I do not hope Mr. Obama fails, as some of my friends on the right do.  With luck and diligent opposition some of the left’s more destructive agenda items may be defeated.  That’s not the definition of presidential failure, uber-liberals’ prematurely hurt feelings to the contrary.

I believe that liberal social and economic policies are the political equivalent of a medical placebo.  They make people feel better about their situations without fixing the true causes of the problems our country faces.  Indeed, the lack of proper attention to these issues may well make the patient worse off in the long run, particularly when the expense – and opportunity cost – of wasteful policy is considered.

Failure would be the country continuing to compromise it’s future economic security by overspending on government programs, including welfare and the military.  Failure would be refusing to  invest in nuclear, coal, and hydrogen-based energy infrastructure that would lessen our dependence on oil pumped from unfriendly nations.  Failure would be expanding government entitlements at a time when basic fiscal policies such as balancing the federal budget are being ignored.  Failure would be catering to society’s fringe elements by endorsing and promoting divisive, anti-social issues such as gay marriage and abortion.  Failure would be yielding to ultra-liberals’ demands to prosecute Bush administration officials as war criminals.

Do I hope President Obama fails?  On the contrary, I pray that he succeeds in recognizing the truth on these and other important issues and leads the nation on the optimal path toward the future.  The fact that he’s a Democrat is immaterial, if he gets the job done, for our ultimate allegiances are to God and truth, not a political party or ideology.

To do this he will have to slam the presidential door against the creeping, grasping progressive liberalism that attached itself to his campaign during the Democratic primary.  Here’s to hoping that Mr. Obama can and will do just that.