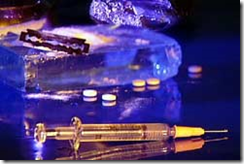 As demonstrated by his recent decision to send help to the embattled Mexico border region, President Obama is well aware of the problem posed by drug violence, both here at home and overseas.  His response, as summarized below, is all wrong.  And that’s not just me talking – Harvard’s Jeffery Miron says that same thing.

The Obama administration’s multi-agency plan includes nearly 500 agents and support personnel. However, officials did not say where the additional agents would come from or how long they would stay at the border.

Napolitano said officials were still considering whether to deploy the National Guard to the Arizona and Texas borders with Mexico, which the governors had requested.

Deputy Attorney General David Ogden said the combined efforts of the U.S. and Mexican governments would “destroy these criminal organizations.”

If you believe that I have some stock in some bank holding companies I’d like to sell you.

It’s too easy to say that the politicians who champion continuing the War on Drugs don’t understand the problem.  Demand creates supply, as any first-year business student knows.  And there’s a huge demand for illegal drugs in this country, whether we choose to accept it or not.  Couple that demand with prohibition and you get a recipe for a black market, corruption, and violence.  It’s not surprising that we’ve seen all three increase in recent years.  Politicians know that but choose to be “tough on drugs” anyway.

Miron says the proper response to the otherwise insoluble problem is to legalize and regulate drugs like marijuana, cocaine, and others.

Federal, state and local governments spend roughly $44 billion per year to enforce drug prohibition. These same governments forego roughly $33 billion per year in tax revenue they could collect from legalized drugs, assuming these were taxed at rates similar to those on alcohol and tobacco. Under prohibition, these revenues accrue to traffickers as increased profits.

The right policy, therefore, is to legalize drugs while using regulation and taxation to dampen irresponsible behavior related to drug use, such as driving under the influence. This makes more sense than prohibition because it avoids creation of a black market. This approach also allows those who believe they benefit from drug use to do so, as long as they do not harm others.

That should be the bottom line in this debate.  So long as drug users do not directly harm others, their actions should not be considered criminal.  Personal liberty demands it, as do common sense and basic economics