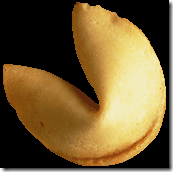 While stuffing my face at the local Mongolian grill and going back for a second  soft-serve ice cream cone I received a slip of paper with a tiny bit of sagely wisdom inscribed.  My fortune read:  “Common sense is all the sense there is.”

I nodded knowingly, thinking of the Ward Churchill case and how Colorado University will most likely be forced to reinstate the horse’s behind of a professor who infamously compared 9/11 victims to Hitler’s Nazis before being fired for shoddy scholarship.

Common sense surely requires that the university be allowed to dismiss the lout.  The school is, after all, a public institution and Churchill’s salary is necessarily paid by the taxpayers, few if any of whom bear any resemblance to Jew-slaughtering storm troopers.

I popped the remainder of the ice cream cone in my mouth, momentarily contented by the sublime sagacity of the little cookie’s message.  Surely, I thought, even a doubting Thomas must accept as evidence of a higher power the providence of such timely encouragement in our lives.

You see, caught between the pincers of a rapidly-approaching deadline at my paying job and an early spring allergy attack, I’d completely forgotten about the Churchill verdict, vexing as it was when I’d heard about it last evening, and so failed to write about it until now.

Perhaps what is most galling is the knowledge that my honky bottom would be out on the street wondering what happened in about 2 seconds flat if my moniker was ever attached to such an offensive, wrong-headed missive as that penned by Ward Churchill.  Are his free speech rights that much more valuable and deserving of protection?

As Clint Eastwood says in Unforgiven, “Deserve’s got nothin’ to do with it.”

Churchill’s tenure give him protection from his enemies that he hasn’t earned and he abused it by comparing innocent victims to hateful killers, apparently to little ill-effect.  But like all such abuses there will be consequences – for others, naturally, if not for the scoundrel himself.

So what’s the lesson for CU and other schools? Don’t offer tenure. Or at least don’t offer tenure until an extraordinary level of due diligence has been performed upon the candidate. Will good candidates stand for such a review? Will they be willing to be vetted like presidential nominees? Will they be willing to sign a form of “pre-nuptial” that allows the university to do what it tried to do to Churchill? It’s hard to overstate the potential impact the Churchill case may have upon the intersection of law and academia.

A contact of mine within one of the country’s major university systems told me that the tenure system would probably be dismantled within the next 10 years.  Too much chance of exposure for colleges at the hands – and mouths – of rogue professors.

Indeed, guaranteed employment is never a good thing because it removes the fear and accountability motives from the equation.  This places power on the wrong side of the employment arrangement and leads, as with labor unions, to a fundamental dissonance between employee and employer, as well as judge and citizenry, as demonstrated by Judge John Jones’ recent statement:

I think that a lot of federal judges don’t have the bully pulpit given to them that they can talk about judicial independence, and I’ve really had an opportunity to do that.

Unfortunately a large part of the public thinks judges are subject to public will, that the third branch of government is subject to majority will.

In a sense Jones is correct – the law is insulated from the whims of public opinion and for good reason.  But neither judges nor the law are above the will of the people.  The proper relationship is demonstrated by this crude chart: 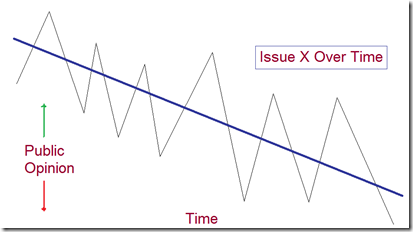 As I munched on the last pieces of my fortune cookie I thought that the Churchill case would be the crux of this post.  But fate had other plans, what with the Iowa Supreme Court coming out of left field today and serving up a unanimous ruling against the state’s protection of marriage law.

As with Judge Jones’ misguided notion that judges are not accountable to the citizenry, Iowans have had their legal sovereignty stripped by an activist court that seems to know no bounds to its power to re-interpret the Constitution to fit its agenda.

…never before have judges interpreted the Iowa nor the U.S. constitution in a way that gays can marry to each other [sic]. Marriage has always legally been explained as a contract between a man and a woman. If you believe same sex marriages should be legalized, you amend the constitution  and / or pass (other) laws that legalize it.

Judicial ruling should be in keeping with the intent of the Constitution.  That is why that particular document is the law of the land.  Overall, the aggregate of judges’ rulings should have the effect of smoothing out the radical edges of public opinion as well as the less volatile republican bodies that answer directly to the citizenry.

The one thing the judiciary should never do is radically redraw the legal line beyond the point of public support.  Yet time and again in the last few decades an unaccountable judiciary has defied the public and taken radical positions that disenfranchise us by negating our will.

Personally I’d suggest that judges take some more long lunches and crack open a few fortune cookies instead of spending their time and our money and energy on their personal sociological experiments.