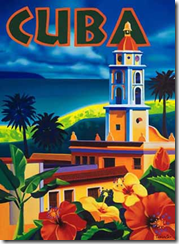 Following in Jimmy Carter’s footsteps in yet another way, President Obama plans to lift travel restrictions to Cuba.

President Barack Obama plans to lift longstanding U.S. restrictions on Cuba, a senior administration official said, allowing Cuban-Americans to visit families there as often as they like and to send them unlimited funds.

The gesture, which could herald more openness with the Castro regime, will fulfill a campaign promise and follows more modest action in Congress this year to loosen travel rules.

In as far as it goes, this is a good thing.  I can think of no worthwhile reason for the U.S. to restrict travel to and from Cuba, nor of any strategic objective that is served by keeping the country isolated and dirt poor.

Unfortunately, Obama apparently doesn’t plan to call for an end to the trade embargo with the island nation, site of President Kennedy’s abortive Bay of Pigs coup attempt.

Reaction to the expected policy shift was mixed. “The status quo has been unnatural and immoral,” said Julia Sweig, a Cuba specialist at the Council on Foreign Relations. “This will at least allow families to begin to normalize, if not the two countries.”

Some Cuban-American circles have pressed to maintain U.S. restrictions because of their antipathy for Fidel Castro and his brother, Raul, who replaced him as leader after Fidel became ill. “How do you help people speak out about human rights violations if you’re basically extending the dictatorship abroad?” said Mauricio Claver-Carone, director of U.S. Cuba Democracy PAC.

I hate to point it out, Mauricio, but the Castro boys have been in power for over 50 years.  Many countries have come and gone in shorter time spans.

The fact that Fidel Castro and his ilk have held a nation hostage so close to U.S. borders is galling, certainly.  But it’s time to accept that this thing has happened in Cuba and move on, even if it means that Cuban-Americans have to accept that there’s not going to be a triumphant return home at the fall of the dictatorship.

There is also the question of whether flow of trade with Cuba would be more or less likely to lead to economic and governmental reforms there.  I think it opens the door to change because a people starved for trade and prosperity will demand it once it becomes possible.

A More Correct Definition of Tolerance