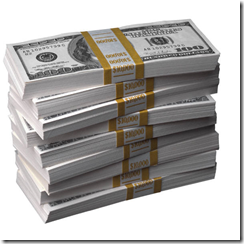 Earlier today economist Dr. Arnold Kling made a short, sweet distinction between government taxation/wealth redistribution and charity that we’d all do well to bear in mind:

You can be a bleeding heart, but you show it by what you do, not what you advocate forcing other people to do.

It’s alarmingly easy to spend other peoples’ money solving the world’s problems.  It’s also wildly inappropriate in a society with the fewest barriers to class mobility that has ever existed.  Giving away the earnings of others is not generosity, it’s confiscation.

This fact is lost on the editors of the NY Times, who yesterday bemoaned a cut in estate taxes for the wealthiest American families.

Under today’s estate tax, which is retained in both the House version of the budget and in President Obama’s version, 99.8 percent of estates will never owe any estate tax. That’s because the tax applies only to estates that exceed $7 million per couple or $3.5 million for individuals, and a vast majority of American families are not and never will be that wealthy.

Perhaps not.  I am certainly not going to meet that threshold in the absence of an unforeseen confluence of the Texas lottery and an act of God.

Nevertheless, the fact that a small minority of people are more successful than others is neither a justification to steal from them nor a mandate for the state to force their children to “earn their money the old-fashioned way”, it’s merely a policy of social engineering founded on the basis of guilty feelings.

Competition No Longer an American Ideal?

Put People to Work by Lowering the Minimum Wage