What do you get when you mix a major economic slump, a new president with decidedly liberal ideals, an economic plan that calls for unprecedented levels of spending and debt, and at least 4000 Texans concerned about the situation?  Call it a Texas Tea Party! 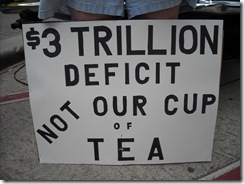 First, let me get in a big thank you to Michael and the guys for hot-posting the pics and commentary earlier in the evening.  It couldn’t have been easy dealing with the stream of texts I was sending.

Back on point, I had the opportunity to talk to a number of the protesters and almost to a person the reason given for their attendance tonight was a genuine, strong desire to see government brought to heel.  Why?  In order to preserve liberty and freedom for everyone but most importantly future generations.  It may sound corny, but I heard that refrain repeatedly from audience and stage alike tonight.

That’s one of the reasons that I simply must say that the Houston tea party was a very cool event.  You never know what to expect when a crowd of emotional people get together the vent their frustrations, but the protest was very much a family-friendly scene.  At no time was there even the slightest hint of the mob mentality that we’ve all seen in video footage of protests the world over, notably in our own country in the 1960s and in London this year.

Many protesters had their children with them, a good percentage of whom had made up their own signs, though probably not with out a bit of help from mom and dad.  Even more telling were the signs held above heads with statements such as “I’m here to protect my granddaughter’s future”.

On this point the people spoke clearly in Houston tonight.  Government, they said, was intended in this country to be controlled by the people and not the other way around.  In the eyes of these Texans, this is a lesson the Obama administration needs to be taught and the more sharply and surely the better. 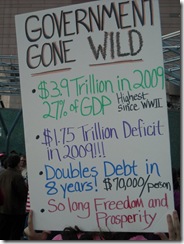 The people I talked to were willing to acknowledge and even criticize the fiscal policies of the Bush administration.  But the events that have unfolded since President Obama’s victory over John McCain have not been lost on them.  Nor has the new president’s plan to outspend President Bush by hundreds of billions of dollars each year of his administration.  And then there’s the small matter of the unfunded trillion dollar bailout of the financial system.  It’s understandable why people are angry with Washington these days.

Who are these protesters?  Mostly ordinary Americans like me.  On average, exactly like me.  Certainly there were people of all shapes, sizes, creeds, and colors in attendance, but the audience was primarily Caucasian in tone and between 30 and 50 in age.  Good, solid, square, white-bread America.  The kind of people about whom Jimmy Stewart said in It’s a Wonderful Life: “this rabble you’re talking about… they do most of the working and paying and living and dying in this community.”

That’s who was in attendance at the Houston tea party tonight – the very people who do the lion’s share of the tax-paying and church-going in this country, the hard-working, faithful, middle and upper-middle class who should constitute a postcard picture of the American dream and would, were they not weighed down by a 40+% tax burden, most of which has been incrementally imposed by a massive, controlling federal government.

Judging from their response to the event’s kickoff, a reading from the Bible, the crowd was substantially Christian as well.  The message in 1 Samuel 8 is that a people should be wary of men put in authority over them, for the power a king – or a president – wields is beyond the imagination of most of us.  Israel came to regret the appointment of Saul as the country’s first king and the parallel was not lost on the mostly conservative and libertarian protesters. 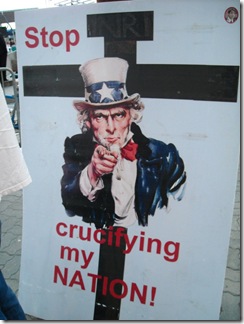 This fact will surely rile the liberal left who are justifiably frightened by the spontaneous combustion of the conservative “counter-culture”, if such a description can be applied to the salt of the Earth.

As you might suspect, the finger-pointing has already started.  Among others, the seriously-needs-watching Jane Hamsher is busy conjuring a right-wing conspiracy at HuffPo, her own perch at FDL apparently not being connected enough for this effort.

What Jane and her compatriots are missing – of course – is summed up nearly by what one man said to me today.

“Even if Rupert Murdoch is paying for the whole darn thing himself the thousands of people who showed up here were still motivated to come here all on their own.”

That’s the one thing that scares the left – getting a taste of their own medicine.  The liberal movement that took over American streets, universities, and culture in the 1960s and 1970s was based on rabble-rousing, name-calling, and even violence against the so-called “establishment”.

Now the left is the establishment and they fear the very tactics they used to force their agenda on a silent majority of their fellow citizens.  Are the tea parties a sign of things to come?

U.S. Congressman John Culberson (R) of Houston was probably wondering the same thing as he walked the crowd.  I had the chance to talk to him briefly about the event and calls for terms limits, something I’ll discuss in a future post.

The answer is that it depends on whether the people who came out today will follow through on their beliefs and turn this event into a movement.

In that respect, my own actions may be revealing.  You see, I have this little obligation called a job that demands my attention 8-10 hours every day and, with a 2 hour drive ahead of me and this column to write, I decided to skip the event’s nightcap, the symbolic march on the Houston post office. 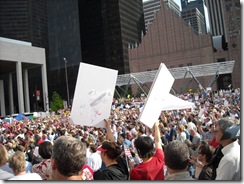 As I was walking to my truck I chanced to see the protesters marching and chanting past the Houston Chronicle’s headquarters, their spirits and signs both held high, the sense of order and decorum that had governed the crowd’s behavior still largely intact as a goodly number of them saw the event through to its conclusion.

You see, the middle-class’ very penchant for productive work works against them when it comes to creating a mass protest movement for one simple reason – they have other things to do besides walking the streets with signs and taking over public buildings to bully others into submission.

Then again, as I crossed the street into the parking lot a man, presumedly homeless, though looks can be deceiving, called to me asking if I could spare a dollar.  I gave him 5.

I say this not to impress anyone.  Far from it, as Matthew says, it is better to give in secret so as not to boast.  The point is simple:  average Americans can and do rise to the occasion when the need arises.

That time has come, as 4000 Houstonians demonstrated tonight.  Our government needs to remember the purpose of its existence and at whose mercy it serves. 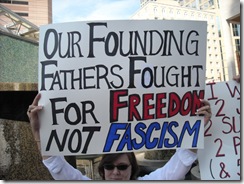