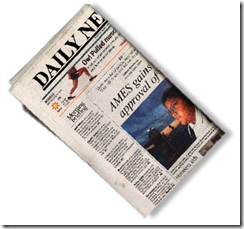 Jane Hamsher’s a busy girl.  Busy, that is, following the rote formula of bashing the conservative competition before launching into her agenda, which in this case is all about keeping that lefty blogger no-one-wants-to-pay-us-for-our-hard-work theme going:

It’s staggering just how ignorant right wing bloggers are about how the business of media works, or business in general. Which wouldn’t be so ironic if they didn’t run around thumping their chests about the virtues of “free markets” and capitalism all the time.

The problem is that groups who send us their press releases expecting “earned media” just as they do the New York Times get the same “earned media” from us that they do from the New York Times. The difference is that they aren’t factoring us into their “paid” media budgets, and like the New York Times, without that, we don’t have a sustainable business model to keep offering “earned” media. As groups increasingly depend upon us as the only news outlets covering their issues (which we do without consideration as to whether they advertise with us or not), participating in a sustainable structure is something they need to be thinking about.

News flash – if a group or company can get your services for free, as part of your defending the cause or whatnot, then they’re going to do that.  If that doesn’t make you happy, try to charge them for your services.  If your work is valued at a premium compared to others willing to provide similar content – and there are a lot of them, aren’t there? – then they’ll meet your price.  If not, well, you don’t have a sustainable business model, do you?  No, not when the going price for writing ideological put-up material is effectively zero.

It’s just staggering, the ignorance that underlies this denial of reality.  It’s as though Jane, Kos, et al, are brain-locked into the opening sequence of the TV show Myth Busters in which Adam says, cheesy grin in place, “I reject your reality and substitute my own.”  If only that were possible.

The idea that FDL and dKos are somehow owed patronage by the groups whose agenda they helped catapult into power is preposterous.  Business is about what value a server provider will have for a customer going forward, not about what happened yesterday.  For them to show you the money you have to have something to offer in return, something unique that justifies the expense of doing business with you, the payback for which is timely from the customer’s perspective.

At the risk of taking too great a detour, this story about small business owners in Hawaii is demonstrative of the essential point here, which is that in order to get the results you want, hard work targeted to the immediate need at hand is required.

Seems the businesses were having trouble getting something for nothing out of their patron, the state of Hawaii in this case.  Seeing the difficulty this put them in, the owners decided to stop complaining about what they weren’t getting for free, roll up their sleeves, and solved their own problems all on their own.

So when Kos complains about the AP trying to establish a market value for services it’s been providing essentially for free to sites like his, realize that it’s because he has a need for AP’s content, is unable to generate it on his own, but is unwilling to meet AP’s as yet unset price.

Perhaps AP will realize that harassing bloggers and/or charging them will not help them meet their objective of raising revenue.  But it’s their right to try and create a business model that is sustainable by setting a price on their content.  This is what FDL – and the PoliGazette as well – will have to do in order to survive in a very competitive environment in which the competition is often willing to work for free – establish value for businesses on their sites and price space there accordingly.

The new bottom line is that, like the Hawaiian business owners, modern news hounds expect to get news content for free.  That’s why the Times shut down its pay service – because the eyeballs were all going to free sites.  Perhaps as news organizations continue to go bankrupt consumers will realize that value has been lost and will begin to support the surviving news organizations.  But I doubt it.

The consolidation of news providers will end the same way that the phenomenon of on-line retailers ended, with a few survivors dominating the majority of the landscape.  There is no need for multiple on-line book stores.  Similarly, there is no need for fifty different newspapers and cable news networks to interpret President Obama’s latest speech.

All citizens require is for the White House to publish the videos on YouTube and perhaps provide transcripts of official events.

When opinion and commentary are wanted, people will pay for it by supporting writers who add value to the real news analyzing it in unique, useful ways.  By support I mean doing it the Michael Totten way, by providing them with the means to do their work for as long as that work has real value.  When it doesn’t, the money will move to someone whose work offers more.

That’s the way the media business of the future is going to work.  Not as a sustainable arrangement of interleaved, interdependent, multi-level media marketing schemes but in a chaotic, vibrant environment in which very small organizations supplement a few large news organizations by doing all the little things that people value that the remaining big guys can’t do.

Dave Winer had this to say yesterday (emphasis mine):

Focus on what you love about news, and then bring more of that to the insatiable users of news. If you’re making people happy, they’ll find a way to keep you doing it. It’s like Napster in 2000, the music industry was complaining while millions were freshly excited about music, for the first time in 25 years. People were talking about music on airplanes, in supermarkets. There had to be a way for them to make huge money from that, instead they tried to stop it. AP — same thing, now in 2009. We love news. We don’t love what the cable networks are providing us. The papers are folding. Get on top of the Internet, don’t try to crawl under it.

Texas A&M In the News Again

The Myth of Student Free Speech