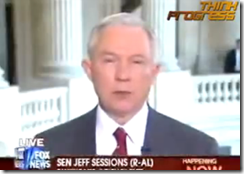 Satyam Khanna says that Senator Jeff Sessions’ statement, “I think that would be a big concern that the American people might feel — might feel uneasy about that”, qualifies him as anti-gay.

Typical Think Progress hyperbole.  Citizens might indeed be concerned about a gay member of the Supreme Court and the rulings that might stem from such an appointment.

Why?  Because all but the most disciplined of us are inclined to judge those most like us more favorably than those less similar.  Judges are supposed to put personal feelings – and political ideologies – aside when they put on their robes.  To say that doesn’t always happen would be quite the understatement.  So the concern is legitimate, at least in part, simply because of human nature.

That said, it’s likely that there are qualified homosexual judges out there whose rulings would not be any less bad than, say, those of John Paul Stevens or Ruth Bader Ginsburg.  It’s certainly possible for President Obama to appoint a homosexual equivalent of Clarence Thomas, albeit it unlikely given Obama’s liberal streak and the correlation of leftist politics with homosexuality.

Even less clear are the true demographics of homosexuality.  By being generous, one might peg the percentage of homosexual Americans at 5%.  While a significant minority, there is still no basis to the idea that homosexuals are underrepresented on the court.  A group would have to at least approach 11% to grant that claim legitimacy.

So what was it exactly that Jeff Sessions said?

“Republicans do not believe in identity politics.”

Admittedly the last is a lie.  Most politicians not only believe in identity politics, they rely on it.  The real question is whether one is allowed by political correctness to embrace or castigate a particular identity brand at a particular moment in time.

Sessions’ crime, like that of so many Republicans, was telling the literal truth Americans’ feelings on the subject.

Gay Republicans: To Purge or Not to Purge

France to force through contested labour reform without vote