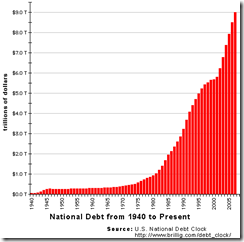 Writing about the $13T in unfunded Social Security obligations, Robert Reich, the former Secretary of Labor, says “Social Security is a tiny problem” and “Medicare is entirely different. It’s a monster.”

Reich is right that Social Security is the lesser of two evils; however, he’s dead wrong about Social Security being a little problem.  To put matters in perspective, the Social Security debt alone is equal the entire federal government for 5 years if one assumes a rational spending plan or 3 years of the Obama administration.  It’s also nearly the entire annual gross domestic product of the United States.

Reich reckons that the GDP will grow at more than the feds’ estimated rate of 2.6% annually – this despite the devastating recession that’s swept over this country since Barack Obama was elected president.  This seems unlikely given several factors.

Some of these fundamental problems include:

There are other issues such as global unrest and Islamicization, foreign competition, and a home-grown, country-wide sense of entitlement that further exacerbate the problem of financial folly that the American government has created over the last 40 years.

The Social Security problem – the little one, mind – dwarfs the current woes of the banking sector, problems caused in large part, it pays to remember, by government’s intervention in the market in the form of mandating loans to unqualified home buyers.  That crisis spurred Barack Obama into a full-speed gallop to the rescue, the Congressional coffers literally dripping billions of dollars as Democrats made haste to shoot the wad of their political windfall in the name of economic stimulation.  What then will the coming Social Security crisis entail when it hits a couple of decades down the road?

Will it even matter?  Probably not.  Perhaps the reason that Reich can be so cavalier about Social Security tanking is that the Medicare train wreck will happen first and so devastate our financial situation that Social Security will simply cease to exist.

Reich says that Medicare can be fixed by eliminating waste, forcing people into preventative care, and reducing medication.  The government health care program will be so much more efficient than our current system that we’ll save $50T by converting to it.  Not bloody likely.

Most people agree that the real solution to the health care cost crisis is reducing demand for health care.  While it’s fine to talk about preventative care – I’m certain that doing more in that area would save some money – the fact is that human bodies are born to die.

Despite knowing this, we spend far too many of our resources keeping dying people alive as long as technology allows.  Until we face that unpleasant truth no real progress will be made in addressing the rising cost of health care, particularly in a government-run system that is bound to obey public opinion rather than economic reality.

3 Congress Critters and Their Tales