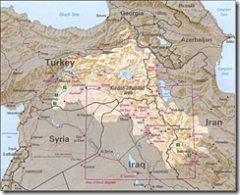 From the NY Times – fifteen years ago – but still highly relevant given recent events:

The Foreign Ministers of Turkey, Iran and Syria condemned the creation of a de facto Kurdish state in northern Iraq today and warned Kurdish leaders that they would not allow it to lead to the partition of the country.

“We are concerned about the transfer of this de facto partition of Iraq into a permanent reality,” said Foreign Minister Farouq al-Sharaa of Syria. “We want to avoid a situation where this partition is inevitable.”

More recently, Turkey has recently voted to allow their leadership to attack rebellious Turkish Kurds who may flee to Iraq after attacking targets inside Turkey.

NATO Secretary General Jaap de Hoop Scheffer phoned Turkish President Abdullah Gul and urged Turkey to “exercise the greatest possible restraint, particularly in this time of great tension,” James Appathurai, a spokesman for the alliance, said at a briefing in Brussels. Turkey has the second-largest military in NATO.

Gul rebuffed Scheffer, according to Turkish accounts, echoing the comments of many lawmakers during Wednesday’s legislative debate in saying, “Terrorism cannot be presented as excusable in any way and Turkey will obviously take any measure to stop these heinous attacks,” Turkish news agencies reported.

Naturally Iraq’s Kurds resent the Turkish threat and potential destruction it might bring with it:

In Kurdish Iraq, people expressed anger over the Turkish moves. Faisal Muhammad Abbas, 28, a university student, said that Turkey wants to bring “disaster” to his part of the country. “They think if Kurdistan will continue improving in Iraq this will be a motive for the Kurds in Turkey to call for the same thing and fight for it.” Some Kurds say they have already fled their homes because of Turkish shelling.

It’s also been reported – by what may be a questionable source, it should be noted – that Turkey has formed a semi-secret alliance with Iran in order to press the attacks on Kurds in border territories and inside Iraq.

Other writers on this site have more knowledge about the region than I do, so I’ll ask this question:  Why do Turkey, Iran, and Syria insist on keeping the Kurdish people under their respective thumbs?

The obvious answer can be gleaned from the old Times article:

Both Iran and Syria also have restive Kurdish minorities and fear increased agitation at home if an independent Kurdish state takes root in Iraq.

But that’s only a problem if the countries that govern Kurdish territories continue to hold fast to their claims.  Why do they, given that Kurds, who are a minority in all of these countries, want to be independent and have been fighting a low-key, terrorist-style rebellion against them for decades?

There are many oil and mineral resources in Kurdistan. KRG-controlled parts of Iraqi Kurdistan only by itself is estimated to have around 45bn barrels of oil reserves making it sixth largest in the world, mostly recently discovered. Extraction of these reserves is said to begin within the first three months of 2007. These are excluding those of Kirkuk and Mosul, cities claimed by the KRG to be included in its territory, though in these two cities oil was extracted predominantly by Iraq’s former Baath regime.

Consider another question:  How are the Kurdish rebellions different from the Palestines’?

Given that the justification of Palestinian terrorism is the desire for a state of their own it seems somehow duplicitous for the Kurds’ rulers in Damascus, Ankara, and Tehran to fail to grant their resistance the same level of legitimacy that they grant to the Palestinians.

The only difference seems to be that those doing the repressing in Kurdistan are those who would lose territory as a result of the Kurds gaining independence.

Iraqi Gays Murdered By Their Own Tribe

Diplomats Say "No" to Iraq

2 thoughts on “Kurdistan and Self-Rule”