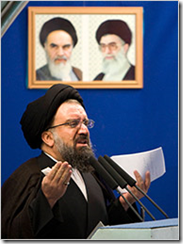 The New York Times thinks so after Ahmad Khatami, a senior Iranian cleric, called for the execution of protesters and the Guardian Council stated that the elections in held in that country were “healthy”.

The direct confrontation over Iran’s presidential election was effectively silenced Friday when the main opposition leader said he would seek permits for any future protests, an influential cleric suggested that leaders of the demonstrations could be executed, and the council responsible for validating the election repeated its declaration that there were no major irregularities.

This despite the fact that massive fraud was previously acknowledged in 50 cities across the country, leading many to wonder how much in the way of voting irregularity went unremarked by the regime.

You have to wonder how long protesters can keep up their spirits and efforts while being hunted and beaten on a regular basis.  Unfortunately it now seems that the Iranian rebellion popularized on Twitter may end as such rebellions typically do, with the brutal power of the state crushing the hearts and skulls of unarmed citizens, thereby ensuring more years of oppression for people who only want to live their lives as they see fit.

Sadly, the President of the United States, one Barack Obama, has been on the wrong side of this issue from the beginning.  First he failed to recognize the vote fraud that will perpetuate Ahmadinejad’s rule in Iran.  Then he failed to give even the pittance of verbal support for those protesting in favor of free and fair elections.  Finally Mr. Obama was forced to acknowledge these things when the Iranian state inevitably became violent, only to have the protests begin to fade away as pressure from the mullahs forced the people to fall silent.

Who knows what might have happened had Mr. Obama simply responded honestly and openly to the facts on the ground instead of playing a cagey, strategic game with the protestor’s lives?

There are those who claim that this was the right thing to do, that the strategic advantages achieved by doing nothing outweigh the obligation that America has to support those who would bring change to Iran and the Middle East, and that our passive reaction to a once-in-a-generation opportunity in Iran will bestow favor on America in the eyes of the mullahs who run Iran.

Shame on them for their lack of vision and courage.  So little was asked of the Obama administration – simply telling the truth was all that was required.  Now it appears that their lack of conviction has cost us this chance for change, along with the lives of many Iranians who will go into their graves unknown and unsupported despite having embodied everything the United States purports to value.

No Gays in Iran

Denmark On a Roll