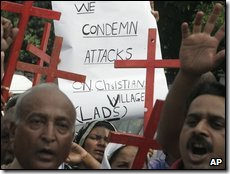 At least 6 Christians – all but one women and children – have been killed in Gojra, Pakistan by a rampaging mob of Muslims. The reason? It was rumored that a Koran was damaged in a Christian wedding held in the town.

Not surprisingly, officials said the rumors which led to the murders and torching of homes were false.

I say not surprisingly because – and this may come across as overly blunt, for which I apologize – I don’t think that many Christians would bother vandalizing a Koran. I say this not because they respect the book or because they are afraid of the all-too-typical, too-violent Muslim reaction, but because they simply don’t consider it worth the effort. I could be wrong, of course, but that’s certainly how virtually all American Christians see the matter. I’m always suspicious of these so-called desecrations for that reason.

However, that’s not where I want to go with this article. The real issues are the reactionary, mindless, hateful violence that always seems to follow rumors about damage done to this Koran or the other and the seeming inability of young male Muslims to restrain themselves from participating in such pogroms of death.

(I know I’ve been over this before. Skip to the next article if you’ve been through it with me before, because evidently I must say it again.)

If you’re a young Muslim male thinking of setting out to kill some Christians or Hindus or Hare Krishnas over the alleged desecration of a book, at least have the presence of mind to establish their guilt before torching their home and butchering them as they flee. Also, if you’re willing to venture that far into the realm of common sense, then how’s about having the decency to only murder the guilty parties and not their neighbors, parents, in-laws, cousins, children, livestock, dogs, etc? Not too much to ask, methinks.

Next, if such an event actually occurred, consider the defiled book itself. It is only ink and paper. Regardless of how much stock you place in the Koran’s words (for I hope that you have read the book and do treasure its contents – that is the prerequisite for such a bloody vendetta), its physical manifestation is almost always commonplace. It likely rolled off the assembly line with thousands of other books exactly like it and so has no particular inherent value, least of all compared to a human life.

Finally, consider those whose exhortations you so blindly follow. Why are they pursuing violent ends? What do they truly hope to gain from their actions? Do these men really exemplify godly behavior? Do you really want to be commanded by such as these? While you have undoubtedly been taught to respect their position and authority and have, in many cases, been directly educated by them, the final determination of whether to follow the mob, to stab and shoot and rape and pillage and douse with gasoline and set on fire is up to you to make. Remember that you will ultimately have to answer for your actions.

So have the moral courage to question them. Think for yourself. Make your own decisions. Follow your own conscience. You’ll still be wrong as hell if you rape and murder with the rest of the mob, but at least you can face God as some sort of a man rather than as a complete fool.

Officials in Pakistan have upped the body count to at least 8 in this sickening case and released the fact that a family was burned alive by the Muslim mob. Locals say the total death toll could be in the dozens and that police did nothing to stop the rampaging supporters of Lashkar-e-Jhangvi as they conducted what must be called a religious cleansing in the town.

As Michael vdG pointed out in an email, Muslims do revere the Koran in and of itself. From Wikipedia:

Most Muslims treat paper copies of the Qur’an with veneration, ritually washing before reading the Qur’an. Worn out, torn, or errant (for example, pages out of order) Qur’ans are not discarded as wastepaper, but rather are left free to flow in a river, kept somewhere safe, burnt, or buried in a remote location.

Based on tradition and a literal interpretation of sura 56:77-79: “That this is indeed a Qur’an Most Honourable, In a Book well-guarded, Which none shall touch but those who are clean.”, many scholars opine that a Muslim perform wudu (ablution or a ritual cleansing with water) before touching a copy of the Qur’an, or mus’haf. This view has been contended by other scholars on the fact that, according to Arabic linguistic rules, this verse alludes to a fact and does not comprise an order.

Regardless, a book is just a book and not worth a single human life. The so-called clerics who started this wildfire do not deserve to hold any position of authority or claim to be men of God.

Several Muslim groups met in Gojra, Pakistan, today to hold a press conference calling on the government to exonerate religious leaders accused of inciting the anti-Christian attacks that occurred this past weekend. In addition, they threatened to hang the Christian whose alleged blasphemy sparked the violence.

Muslim groups Jamiyat Islami Gojra (a religious group) and Anjman-e-Tajran (a trade union) initially condemned last weekend’s violence in their statements. However, they quickly reversed course by calling for the release of Ulma and the other clerics named in the official police report. They further contradicted their initial statement by threatening to hang Talib Masih and others accused of blasphemy in the Gojra bazaar if the government had not arrested him by August 10.

Amazing how they show absolutely no respect for human life or the rule of law.

If they think their behavior is inspired by God, they’ve got another thing coming.