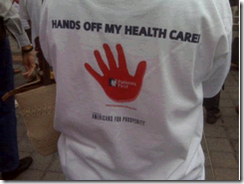 There are those who believe that when radical environmentalists run amok it’s acceptable, even laudable – because it’s for a worthy cause. But when citizens of the United States attempt to exercise their Constitutional right to control their government by demanding that the left’s massive takeover of health care in this country actually be paid for, those same people are suddenly for shutting up and toeing the government line.

The entire Republican leadership has been fanning the flames with persistent lies claiming the Democrats want to force euthanasia on old people, abortions on the unwilling and have Obamacrats tell your doctor how or whether to treat you. We’ve seen months of pernicious lies, and they’re having the predictable effect in scaring the elderly and inciting the gullible to vent their anger at anyone they can associate with Obama or health reform.

Maybe I’ve been living up under a rock, but I haven’t been exposed to months worth of “pernicious lies” or heard about forced abortions as a result of the new plans.

What I have heard, repeatedly, is that people who work hard for a living and who have good-quality healthcare available to them as a result of that effort do not want the government to take that away from them.  That’s why the poll numbers calling the American system good or excellent have suddenly shot up – people are convinced that the new plan will make things worse for most of us.

What makes us so sure about this outcome is history. Government-run programs have a long track record of being overly bureaucratic, requiring ridiculous amounts of paperwork, of causing delays for “customers”, of being overly rule-driven rather than outcome-driven, and of costing far more than private-sector services.

Offsetting this we have only the word of an unproven politician who has already spent hundreds of billions of dollars that we don’t have and whose promises of lowered taxes on the middle class, never believable, are soon to be proven false.

Small wonder that the Tea Parties have become so popular among the middle class. It’s our future – and our children’s future – that liberals are planning to squander. And it’s our right to demand that Congress stop, right where it is, and put a hold on healthcare reform until it can deliver a plan that guarantees that no person with existing coverage that they’ve earned will be worse off under the new plan.

Moreover, it is every citizen’s right to expect, demand, and call to account a Congress and a President that fails to deliver a balanced budget each and every year. We did not do this with President Bush, but the truth is that W’s deficits were a mere fraction of what President Obama has already proposed without due consideration to the expenses of the proposed healthcare plan.

Such demands are not thuggery.  They are not pernicious and are not threatening save to the egos of those on the left whose concern is more for their liberal agenda than for the rights of the taxpayers.