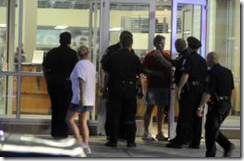 A man, so far unidentified, went into a dance class at an L.A. Fitness health club near Pittsburg, Pennsylvania and opened fire on those working out, killing at least 4 people before committing suicide on the premises. Preliminary reports indicate that the man had gone there looking for his former girlfriend.

Given that’s true, this is another in a seemingly endless series of cases in which men who are unable to deal with adversity in their lives snap and go berserk, killing everything in their path.

Look, men, s**t happens in life and we don’t always get our own way. This incredibly mistaken idea that we are each somehow entitled to the life outcome of our choice is a fallacy. It has never been true and it never will be.

It’s way past time that we jettisoned this particular permissive fantasy and started deliberately training boys to become men of substance rather than neurotic, emotionally-stunted brutes.

One important step to take – just one of many – would be to balance the ration of male/female teachers in our public schools.

Islamic Honor Killings On the Rise in Iraq