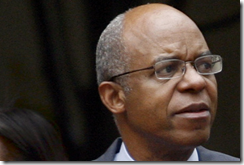 A jury in Alexandria today ruled as everyone knew they would and found former Democratic Congressman William Jefferson of “cold cash in the ice box” infamy guilty on 11 counts of corruption.

Nearly 2 years ago I wrong that Jefferson “should be dealt with – and will be, in time, I am confident – with all the weight and force of the legal system.”

“He never let an opportunity to demand a bribe payment pass him by,” said assistant U.S. Attorney Rebeca Bellows in her closing argument.

Justice, long denied by Jefferson’s misuse of his position and bizarre legal posturings, has finally been serviced.  If more people were aware of it, this case could serve to reinforce the public’s shaky faith in the American legal system.  It often seems that the powerful can do as they please.  Happily, that did not prove the case for William Jefferson, one of the most baldly corrupt politicians of the decade.