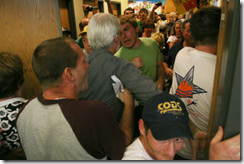 The Wall Street Journal has an excellent editorial up that explains in crystal-clear language why the health care agenda item that President Obama and Democrats in Congress are pushing needs to be killed.  Highly recommended – read it all.

One key excerpt has to do with Democrats’ feeling of legislative entitlement.  “We can do whatever we want!”  Democrats gloated after winning the 2008 elections.  You can see this arrogance every day on C-SPAN, but no such mandate ever existed:

They had no idea how people were feeling. Their 2008 win left them thinking an election that had been shaped by anti-Bush, anti-Republican, and pro-change feeling was really a mandate without context; they thought that in the middle of a historic recession featuring horrific deficits, they could assume support for the invention of a huge new entitlement carrying huge new costs.

Silent Majority to Democrats:  “We can’t afford what you’re pushing down our throats.  Hell, we can’t even afford the programs that you’ve already made us swallow in past decades.  Now we’re afraid that you’re going to bankrupt this country once and for all.”

What the town-hall meetings represent is a feeling of rebellion, an uprising against change they do not believe in. And the Democratic response has been stunningly crude and aggressive. It has been to attack.

Rather than addressing the legitimate concerns of a nation facing trillions of dollars in unfunded government debt and alarmed by the prospect of doubling down on that debt, Nancy Pelosi, Barbara Boxer, and even President Obama responded by lashing out at their critics, calling the citizens of their own country “mobs”, “thugs”, “Nazis”, and even putting up a special hotline at the White House by which neighbors could report their neighbors for their un-Democratic behavior.

Senator John Cornyn of Texas – he’s from my state but is hardly my favorite senator – had to write to the president to protest this bit of cowardice and he was right to do so.  Are we citizens of the Soviet Union to snitch on each other to the KGB in order to curry favor or free people entitled to our own opinions and entitled to reject any and all government programs that are seen as unhelpful?  There is no middle ground on that question and can never be.

The fact of the matter is that without broad public support for their plan, liberal Democrats should recognize that their agenda on health care is not wanted and ratchet down the pressure.  This isn’t a game for small-potatoes – health care is 15-20% of the American economy – and 51% of the votes doesn’t cut it when it comes to something so important and so personal to each and every American.

Moreover, we know that Congress isn’t paying attention to the bills that they are passing.  We’ve already had this demonstrated with regard to the stimulus bill that sailed through Congress unread and unexamined.  Are we supposed to exhibit similar casualness with regard to health care?

It is time for President Obama to lead, to be courageous enough to admit that the time is not right for major health care reform, and to call on Congress to try again and to get their act together by formulating a coherent plan that members have actually read and understand before bringing health care reform to a vote.

Frankly I doubt that he’s got the guts to do that.  Instead, Obama will likely forge ahead regardless of the consequences and regardless of public opinion.  The name-calling will continue unabated until the going gets rough.  Chicago-style, which is something that Obama is unafraid of.

The rest of us, however, should be.  Word is that the AFL-CIO is pulling out all the stops in order to get its members to show up at congressional town hall meetings to “counter” citizens who show up to protest Democratic plans for health care.

Given unions’ long history of using physical force to get their way in “negotiations”, violence is a real possibility.  Another, perhaps equally undesirable, outcome is that conservative protesters will fall silent in the face of union-style bullying tactics and thereby allow brute force to triumph once again in what should be a democratic, intellectual debate.