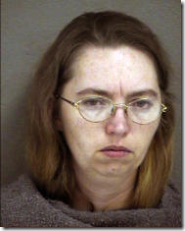 Jurors convicted Lisa Montgomery, 39, of kidnapping resulting in death in the 2004 attack on 23-year-old Bobbie Jo Stinnett in the northwest Missouri town of Skidmore.

The jury deliberated for about four hours before rejecting Montgomery’s insanity defense.

Defense attorneys claimed Montgomery was suffering from pseudocyesis, which causes a woman to falsely believe she is pregnant and exhibit outward signs of pregnancy.

They portrayed her as a victim of severe mental illness whose delusion of being pregnant was being threatened, causing her to enter a dreamlike state when the killing took place.

They also argued that she had post-traumatic stress disorder brought on by mental, physical and sexual abuse in her childhood.

[federal prosecutor Roseann] Ketchmark said Montgomery plotted the slaying and abduction and took pains to cover up that planning after she was caught.

“She knows she’s not pregnant,” the prosecutor said. “It’s no delusion. It’s deceit and manipulation.”

After initially denying the crime, Montgomery told investigators she had taken a knife, rope and umbilical cord clamp with her to Stinnett’s home.

Montgomery used a rope to choke Stinnett, who was eight months pregnant. But Stinnett was conscious and trying to defend herself as Montgomery used a kitchen knife to cut the baby girl from the womb, prosecutors said.

This woman committed a singularly heinous crime, one of the worst imaginable.  Is the death penalty in order?  Absolutely.

Imagine that you’re laid out on the floor, gasping for air, barely able to breathe, desperately trying to protect the baby that you’ve carried inside you for eight long, often exhausting months, months during which you imagined little else but holding that little life in your arms and rocking her to sleep while she snuggled at your breast.  Imagine trying to defend yourself with yourself against a murderous wretch with a butcher knife who’s cutting you to pieces, perhaps cutting your baby to pieces in the process, while you, frantic, choking, your strength fading, strain with all your might in a vain to save yourself and your child.  You lose.  After overpowering you, the killer cuts your stomach open, tears the love our of your womb, takes her into her bloody arms, and leaves you to die without any hope whatever for yourself or for your baby girl.

Reader, if you’ve made it this far and still disagree there’s nothing more I can say to you.

Should Teen Murders Be Executed?