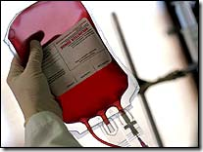 In the U.K., Emma Gough, a young Jehovah’s Witness woman recently died after refusing to accept a blood transfusion that could have saved her life:

She had signed a form refusing blood transfusions, and her family would not overrule her. Couldn’t doctors have intervened?

If they had, they may well have been charged with a criminal offence, and would not have had a legal leg to stand on in court.

And rightly so.  More:

There is nothing medics can do when an adult refuses treatment on religious grounds, says Vivienne Nathanson, head of ethics at the British Medical Association.

“It’s something we just have to live with – the alternative would be to change the law, change the human rights law,” she says. “It’s just too important that we all as individuals are able to make our own decisions.”

Exactly right.  But what is the basis for Jehovah’s Witnesses’ rejection of blood transfusions?  Here’s one explanation:

The Jehovah’s Witnesses are perhaps best known to other Americans as people who won’t allow themselves or their children to have blood transfusions. In fact, they will go so far as to allow a loved one to die rather than accept a transfusion, as they believe transfusions are a gross violation of God’s law. They support this notion with these verses: “Only you shall not eat flesh with its life, that is, its blood” (Gen. 9:4). “You shall not eat the blood of any creature, for the life of every creature is its blood” (Lev. 17:14). “For it has seemed good to the Holy Spirit and to us to lay upon you no greater burden than these necessary things that you abstain from what has been sacrificed to idols and from blood and from what is strangled and from unchastity” (Acts 15:28, 29).

Having read these verses in context, it’s quite clear that the Bible is talking about ingesting blood as food.  Therefore it’s difficult to support the conclusion that Jehovah’s witnesses have arrived at.

I have mixed feelings about the influence of organized religion on individuals’ medical choices; pressure from church authorities can easily displace a person’s own judgment about what is right and necessary treatment in their own specific case.

Jehovah’s Witness liaison committees, who advise both doctors and patients on alternative treatments, are now firmly established in many UK hospitals.

“We are ever more favourably received – doctors are increasingly sympathetic to needs of the community,” says David Jones, a member of the committee for North Bristol NHS Trust.

“We have drawn up detailed care plans for everything from heart surgery to giving birth, including ways to stem postpartum haemorrhage. All hospitals should have access to these.”

That disturbs me.  I have no problem with a person refusing medical treatment under his/her own brand of ethics.  While these “liason committees” presumedly act to advice doctors and hospitals, I can’t help but feel that this is an intrusion into a personal area in which no entity, even one’s own church, should go.

In contrast, some countries seem to have no respect for the patient’s own right to choose:

Like Emma Gough, a young woman in Dublin lost a lot of blood after giving birth to a healthy baby a year ago. A Jehovah’s Witness, she too refused a transfusion.

But an emergency ruling permitted the hospital to carry out the procedure, arguing that the right of the newborn baby to have a family life overruled the mother’s right to refuse treatment.

This too is wrong.

One thought on “Refusing Medical Care”