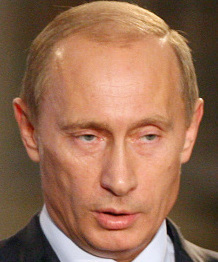 Reuters reports that U.S. officials intend to move ahead with plans to locate a missile defense system in central Europe despite pointed protests made by Vladimir Putin of Russia.

"We are continuing negotiations with those countries (Poland and the Czech Republic)," Daniel Fried, U.S. Assistant Secretary of State, told a news conference in Baku.

"We hope to succeed, and if we succeed, we will proceed with the development of a radar system for the Czech Republic and missiles for Poland," he added.

The plan for a radar in the Czech Republic and interceptor missiles in Poland to avert potential missile strikes from Iran has angered Russia, which says the defense shield would threaten its security.

I don’t imagine that any kind of U.S. military activity in countries once occupied by Russian forces would please the territorial Putin.

But using the sort of parody of truthfulness in diplomacy that Russian leaders have mostly foregone since the collapse of their communist empire, Putin has been comparing the American defensive system still in the planning phase to the clandestine placement of missiles capable of carrying an offensive, nuclear placement in Cuba.   Apples and oranges, as anyone can see.

Russia has been aggressive on the international stage of late and it seems like Putin is spoiling for a fight over just about anything.  The missile defense issue represents, then, a rather more clever than usual bit of foreign relations by the Bush administration.

[U.S. Assistant Secretary of State Daniel] Fried said the United States wanted to cooperate with Russia, but reiterated the Qabala radar could only be an addition rather than a replacement for installations in Poland and the Czech Republic — an idea Russia rejects.

However, he made clear Iran, suspected by the West of seeking to build a nuclear bomb and of working on long-range missiles to deliver it, could change Washington’s plans.

"I believe Secretary of Defence (Robert) Gates said we would activate the (missile) system based on the development of the Iranian threat," Fried said. "So we are not on autopilot."

So the Russians cozy up to the Iranians during their defiance of the U.N. and the U.S. in regard to their progressing nuclear program and are slapped on the hand by the U.S. in the form of a missile defense system on their doorstep.  Good.

It may not be an outright win but it is a smart response by the Bush administration.

The Left’s Pathological Fear of Reality

Coming Soon: an Army of Atheists?