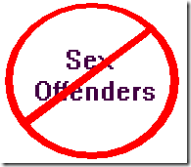 Determined to keep itself safe, an Amarillo subdivision is implementing deed restrictions that will bar sex offenders from owning or living in new homes built there:

G.R. Chapman Limited Partnership said the restriction will apply to future development within The Woodlands. The 550 existing homes are not affected.

“We want to try to have a community that is safe all the way around,” developer Justin Chapman said.

The deeds for new homes will stipulate that a homeowner cannot sell the home if the buyer or a future inhabitant is a sex offender. Violators will be required to sell the home and move.

Federal law prohibits discrimination based on factors including race, religion, gender and age. But court challenges to similar sex offender bans have been unsuccessful, Canada said.

But is it primarily a property rights issue?  Any legal eagles out there want to respond to that statement?

Clearly if sex offenders can’t live in an area they must go elsewhere.  What about the rights of homeowners whose neighborhoods are forced to accept additional sex offenders?

A Houston area subdivision is considering a similar ban and most residents are in favor of it, although some feel that an on-line database of sex offenders’ addresses is sufficient protection.

Regarding the Amarillo case:

Greg Lines, legal chair for the High Plains Chapter of the American Civil Liberties Union of Texas, said the sex offender ban could unfairly lump a wide range of offenders together. He cited an example of a man who was required to register as a sex offender because of a streaking incident.

While I’m in favor of allowing localities to determine their own norms free of government interference, this issue smacks of too much elitism and not-in-my-back-yard syndrome.

From my perspective, laws limiting sex offenders’ proximity to targets of opportunity seem to be more important.  But as a Georgia case recently demonstrated, there can be problems implementing these laws too.

One of the nation’s most aggressive attempts to limit the mobility of convicted sex offenders was struck down Wednesday as the Georgia Supreme Court declared unconstitutional the state’s law restricting where they may live.

The roughly 10,000 sex offenders residing in Georgia had been forbidden to live within 1,000 feet of a school, playground, church, school bus stop or other places where children might assemble. Taken together, the prohibitions placed nearly all the homes in some counties off-limits — amounting, in a practical sense, to banishment.

“What this decision says is we value property rights and the legislature cannot simply snatch them away,” said Sarah Geraghty, a staff lawyer for the Southern Center for Human Rights, an Atlanta-based group that has filed other court actions against the law.

Hhhmmm, property rights again.  Perhaps this answers my question above.

The Georgia law had been considered one of the most comprehensive in the nation, not only for the breadth of its residency limits but also because it covered even the mildest types of sex offender, such as those convicted of having consensual sex acts as high school students.

“It was outrageous — it was ridiculous,” said Wendy Whitaker, 28, a registered sex offender whose case had been used as an example by opponents of the law. When she turned 17, Whitaker engaged in a single act of oral sex with a 15-year-old boy at school. “The law didn’t discriminate between a violent criminal and someone who made a mistake when they were a teenager.”

And there’s the rub:  the notion that we must treat every case equally.

While an admirable legal principle, when applied in a binary form such as “sex offender, yes or no”, non-discrimination can result in a systematic inability to generate desirable outcomes for ourselves.

Perhaps it would be better to acknowledge that it’s most important to categorize dangerous offenders of all types by their likelihood to inflict future damage on others and discriminate accordingly.