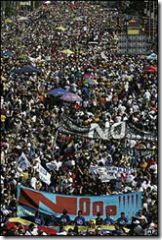 Not long ago the NY Times wrote about Hugo Chavez’s “extraordinary experiment” in oil-fueled socialism thusly:

In two weeks, Venezuela seems likely to start an extraordinary experiment in centralized, oil-fueled socialism. By law, the workday would be cut to six hours. Street vendors, homemakers and maids would have state-mandated pensions. And President Hugo Chávez would have significantly enhanced powers and be eligible for re-election for the rest of his life.

A sweeping revision of the Constitution, expected to be approved by referendum on Dec. 2, is both bolstering Mr. Chávez’s popularity here among people who would benefit and stirring contempt from economists who declare it demagogy.

That popularity, referred to by many other papers and web sites and undoubtedly boosted by the inevitable human response to the promise of free stuff, seemed undeniable and undefeatable.

Yet today that seems to have changed as over a hundred thousand protesters came out of the shadows to demonstrate against the sweeping consolidation of power that Chavez proposes to make his legacy to Venezuela.

The crowds gathered in Caracas oppose the planned changes, which include the removal of presidential term limits.

They accuse Mr Chavez of a power grab but supporters say the changes will deepen Venezuela’s democracy.

It is the latest in a series of student-led rallies, ahead of the “yes” campaign’s final march on Friday.

However, correspondents say the “no” campaign is gaining force.

No official crowd estimates were available but an opposition politician put the figure at about 160,000.

What do the student protesters want?

One female demonstrator told the BBC: “Although I don’t think that all the things that President Chavez has done are bad… I don’t like when the government imposes things.”

The students say they want the referendum postponed to give voters more time to study the plans.

The Chavez government isn’t interested in their opinion, nor does it want the voters to study the plans or think too much about the long-term negatives of a socialist economy.

…the government has described the demonstrations as an opposition effort to destabilise the country ahead of the referendum on 2 December.

Students preparing to march from the Central University of Venezuela in Caracas were undeterred, and said they would do all they could to defeat the referendum.

Good for them.  While I hope that none of them are maimed or killed for opposing the megalomaniacal Chavez, it’s necessary for them to inject their views into the debate now, while there’s still a slim chance of affecting the outcome.

On a fortune cookie I recently received the following was inscribed:

I think the cookie maker must have had some insight into Venezuelan politics.

The Left’s Pathological Fear of Reality