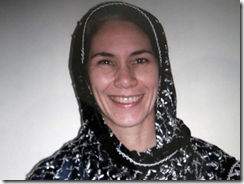 On Monday, the police chief of Kandahar province, Sayed Agha Saqib, said police had not turned up any new information about the kidnapping.

"All of our security forces and intelligence agents are trying to find them," he said.

"Nobody really knows" who the kidnappers are, [foundation director Jeff] Palmer said, adding that the Asian Rural Life Development Foundation had taken precautionary measures for other staff members in Kandahar. He declined to give further details.

Mizell, who taught English at Kandahar University and gave embroidery lessons at a girl’s school, speaks the local Pashtu language well, colleagues said. She has worked for ARLDF in Kandahar for the last three years, Palmer said.

Kidnappings of Afghans have been on the rise in the last year, including the abduction of dozens of Afghans. Rumors persist of foreign governments paying large ransoms to win the freedom of their citizens.

2 South Korean kidnap victims were killed last year while in the custody of terrorists, so Ms. Mizell’s safety is by no means certain, particularly if the U.S. is contacted and is unwilling to cooperate, as per policy.

As Claudia described earlier, terrorists armed with rocket launchers and explosives also held than 300 school children hostage and threatened to blow them up after failing to kidnap a local government official.

Happily, this standoff has come to an end, apparently without any of the youngsters being harmed.  Hopefully Cyd Mizell will be as fortunate.

The Problem with Muslims