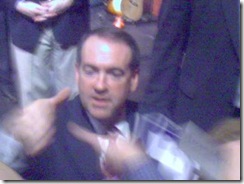 I certainly expect Texas’ young conservatives to be out in force Tuesday if their response to today’s speech is any indication of their support for him.

For them – and for many of the rest of us – Mike Huckabee is the only choice they can make without compromising some important principles. There is no second option because, despite John McCain’s recent conservative conversion, no one else represents conservative values of smaller government, balanced budgets, lower taxes, individual responsibility, and the sanctity of human life. Mike Huckabee is the only one who holds these values and he’s the man who deserves our votes next week.

The fact that John McCain may be more electable in the general campaign is unimportant. Our principles matter, as does the demonstration of those principles. Show them and politicians who are willing to embrace them will appear; hide them and our choices will be limited even further.

The university, which is my alma matter, College Station, and Texas are all tailor-made for Huckabee and his vision of personal and moral responsibility.

People here are more conservative by nature, naturally reluctant to embrace government as a savior or even a safety net, and sure of themselves and God than almost anywhere else in the U.S. There is something different about Texas, however elusive that difference can be to define.

One truth that Huckabee knows is that Texans don’t like it when outsiders try to tell us how things are going to be. Huckabee joked that what he’d really like to see is the talking heads in the media sitting around after the polls close on Tuesday scratching their heads and admitting that they don’t know how he did it but Mike Huckabee has defeated John McCain in Texas.

Right on. Listening to Hillary Clinton’s array of proposals to jump-start American innovation in the green energy sector, I have to admit being inspired by her vision. But the reality is that change happens in its own time, when the time and opportunity are both ripe, not when a charismatic politician begins to talk about it during an election cycle.

True, words can act as a catalyst, but when the initial burst of inspiration as fuel is burned up the process of change is unable to continue on its course because it’s momentum was artificial and the resulting inertia insufficient. That’s the essence of the problem with Hillary’s green energy plans and it’s the problem with Barack Obama’s empty words. Markets and opportunities are not created by taxing and spending – they’re created by demand and when green energy is demanded by consumers it will flower as an industry but will struggle until then.

During the speech Huckabee spoke at some length about his Fair Tax plan and received a thunderous ovation. It may very well be that my taxes will go up under Huckabee’s plan. I don’t know if that’s the case and the truth is that I don’t care. A simple, fair tax system that citizens understand is more appropriate than one that is so complex that even the I.R.S. has difficulty interpreting their own rules. 67,000 pages of tax code? Please!

Huckabee’s related stump story was about a man working 2 jobs to put his daughter through college. Unfortunately he was being taxed more on his second job than his first and struggling even though he was doing everything humanly possible. A tug at our heartstrings? Sure. It’s also utterly wrong. It’s wrong

"The most important challenge is that we move this country vertically, to make sure it goes up and not down."

"Remember, when government does something for you it first has to take something from you."

Also true. Even the most liberal citizen must admit that the government creates no revenue on its own. It has no sales and no customers. To provide a benefit to one person it must take something from someone else. It’s that simple and, frankly, that wrong when taken beyond the minimum necessary level.

One thing that Huckabee brings to the table that America needs in a big way is a sense of humility. He says:

That’s something the Democratic candidates have long since forgotten and their solutions, which always seem to center around the idea that they know better than the people they govern how our individual resources should be managed, reflect that.

While I respect John McCain and will vote for him if he gains the Republican nomination, I still believe that Mike Huckabee is the president that America needs in 2008.

One thought on “Huckabee for President”