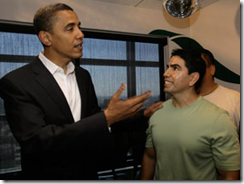 While speaking at Arizona State University, Barack Obama called on students to exercise fiscal restraint and not over-leverage themselves.  Strangely, the Gateway Pundit says that’s exactly Obama did in his personal life by mortgaging his family’s home until they were well “under water”.  No surprise then that:

Obama’s budget more than doubles the national debt held by the public, and adds more to the debt than all previous presidents — from George Washington to George W. Bush — combined.

Pretty audacious then for Obama to call on twenty-somethings to scrimp and sacrifice while he allows their future to be spent on his pork-o-licious budget in the present.

Obama also had this to say about living the Life of Reilly on unearned money:

“We can’t keep on just borrowing from China,” Obama said at a town-hall meeting in Rio Rancho, New Mexico, outside Albuquerque. “We have to pay interest on that debt, and that means we are mortgaging our children’s future with more and more debt.”

Do as I say, not as I do, obviously.  Now that’s true audacity – without even so much as a side of hope for future generations to gnaw on.