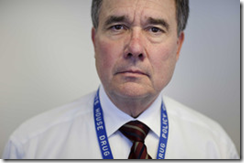 Gil Kerlikowske, new leader of the White House Office of National Drug Control Policy, says that it’s time to stop thinking of the nation’s problem with drugs as a war because it’s harmful, both here at home and abroad:

“Regardless of how you try to explain to people it’s a ‘war on drugs’ or a ‘war on a product,’ people see a war as a war on them,” he said. “We’re not at war with people in this country.”

Kerlikowske, who was police chief in Seattle when it’s tolerance for marijuana use was well-known, sees the issue as much about treatment as it is about law enforcement.

If – and it’s a big question – the government should do anything about drug use, treatment is a logical approach because it deals with – or at least attempts to – the root problem, which is the user’s desire for the substance he or she abuses.

Kerlikowske’s lack of interest in enforcing minor drug laws has police unions and officials looking at him with more than a little skepticism.  Sgt. Richard O’Neill, president of the Seattle Police Officers Guild is one of them:

“The average rank-and-file officer is saying, ‘He can’t control two blocks of Seattle, how is he going to control the nation?’ ”

So is James Pasco, executive director of the Fraternal Order of Police:

“While I don’t necessarily disagree with Gil’s focus on treatment and demand reduction, I don’t want to see it at the expense of law enforcement. People need to understand that when they violate the law there are consequences.”

Pasco is right, of course.  But laws are supposed to be just, sensible, and equitable and our draconian federal drug laws are none of these, particularly as relates to relatively harmless substances like marijuana.

Pasco’s literal thinking is like that of a horse with blinders.  All he can see is his little piece of the picture as he charges forward into battle.  Step back from the fray and it’s a completely different world.  Where is the sense in jailing tens of thousands of young men because they choose to inhale the smoke of a non-sanctioned plant?  Ridiculous.