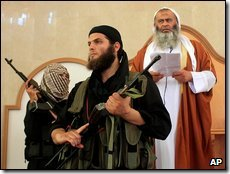 Abdul-Latif Moussa leads an Islamic terrorist group called Jund Ansar Allah that as of now is literally fighting for its survival in the Gaza Strip.  But their opponent isn’t the Israeli Defense Forces as one might expect; rather, Moussa’s group is holed up in a mosque surrounded by hundreds of armed members of Hamas.  At least 10 members of the group, whose unlikely name means Army of the Helpers of God, have been killed already with dozens more still inside.

Details are sketchy.  However, Moussa’s group is antagonistic toward Hamas because they feel that the latter are not radical enough in their opposition to Israel and the west.  That’s saying something, obviously.

Moussa may have brought the attack on his people by declaring Gaza an “Islamic emirate” and denying Hamas’ leadership of the region.  In doing so he has put his own people’s lives in harms way and risks going out in flames, the Gaza Strip’s very own David Koresh, he of Texas’ Branch Davidian infamy.

In typical terrorist leader fashion, Hamas leader Ismail Haniya resisted any stray impulses he might have had along the lines of taking the high road by blaming the radical Muslim group’s actions on Israel, saying:

“And we warn those who are behind these Israeli Zionist declarations: the Gaza Strip only contains its people.”

Incredible.  Hamas has virtually no credibility on the international stage as it is and for good reason.  As Haniya’s refusal to acknowledge reality and call out Moussa for what he is demonstrates, Hamas has no intention of dealing honestly and above boards with the civilized world.

A Small Step for Peace

Of Hurricanes and Sarah Palin